Did Gingrich Lie About His Freddie Mac Salary? 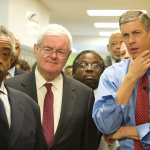 In a recent debate, Newt Gingrich stated that he earned $300,000 for his consulting role with Freddie Mac from 1999-2002 and 2006-2007. However, a former Freddie Mac official said that the number was much higher – as in 5 times higher. According to the official, Gingrich earned $1.5 million for his role as a consultant.

Gingrich claims that he advised the agency to do “Precisely what they didn’t do.” Former Freddie Mac executives dispute that claim. Personally, I’m not sure who to believe, but I do know that working as a consultant for this corrupt agency raises an eyebrow with me.

Say it isn’t so, Newt. I wouldn’t be caught dead voting for you, but I thought you were at least better than the other media frontrunners!

More on this story can be found here