Does the Media Control 1/3 of the Republican Vote? 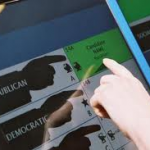 Newt Gingrich is riding high as the current Republican frontrunner. Previous months have seen others, such as Rick Perry and Herman Cain, in a similar position.

It seems that whomever the lamestream media pushes as the current frontrunner receives about 1/3 of the support in the polls. Surely enough, Newt Gingrich has received support in the low-to-mid 30s in most recent national polls.

Mitt Romney seems to hold a steady percentage in the low 20s and Ron Paul generally polls around 10 percent. The other candidates have all plunged from high poll numbers except Jon Huntsman, Rick Santorum and rarely-mentioned Gary Johnson, none of whom ever really lifted off.

Are 1/3 of Republican voters easily swayed by media bias or is there some other explanation for why the media frontrunner generally gets about 1/3 of the support?