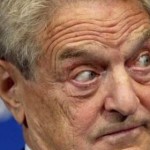 From Wall Street to Bay Street, there are deadbeats aplenty clogging up the sewers of major financial cities. This week the Wall Street protesters have been making their way to the Upper West Side to picket the marbled lobbies of the corporate jet set, meaning doormen have had to put up with unbearable stink. Ugh.

But one of the world's richest business men, the one who has openly stated he's betting against the American dollar and will benefit from its collapse, is immune to the protests: George Soros.

Of course, we all knew he was behind this nonsense, but it's nice to see a mainstream organization like Reuters finally admi

According to disclosure documents from 2007-2009, Soros' Open Society gave grants of $3.5 million to the Tides Center, a San Francisco-based group that acts almost like a clearing house for other donors, directing their contributions to liberal non-profit groups. Among others the Tides Center has partnered with are the Ford Foundation and the Gates Foundation.

Aides to Soros say any connection is tenuous and that Soros has never heard of Adbusters. Soros himself declined comment.

The Vancouver-based group, which publishes a magazine and runs such campaigns as “Digital Detox Week” and “Buy Nothing Day,” says it wants to “change the way corporations wield power” and its goal is “to topple existing power structures.”

Also coming as no shock to Freedom Bunker readers is the fact that SEIU and ACORN-related groups have been present at many of these sit-ins.