Some fun for Friday

Osama Bin laden was killed on Sunday, May 1. I circled the day on my calendar. The next morning, I sprung out of bed, went down to the US 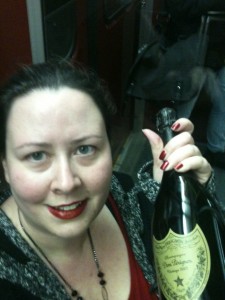 Consulate on University Ave, hoping for a flashmob. When none appeared, I sang a solo rendition of the Star Spangled Banner (staff came out to watch me – probably thinking I was a terrorist), then headed over to the nearest liquor store.

Suffice it to say, my colleagues were very enthusiastic when I came in swinging a $225 bottle of Dom Perignon to share with them in celebration of one of the happiest days…. ever, actually.

hestar.com/news/world/article/1077542–the-10-000-bottle-of-wine-being-uncorked-because-of-bin-laden-s-death” target=”_blank”>I'm not alone in breaking out the big guns:

California restaurateur Ted Balestreri will think twice the next time he makes a bet with old friend and former Pentagon chief Leon Panetta.

Last year during Balestreri’s annual New Year’s Eve party at his Monterey restaurant, The Sardine Factory, friends chided him over when he would uncork a $10,000 bottle from his rare wine collection. Balestreri joked, “If Leon catches Osama bin Laden, we’ll open that bottle.”

Panetta, then head of the CIA, jumped up declared “You’re on!” Balestreri recalls.

Stories like this – stories that involve dead terrorists and good wine – make me smile.