Would Mitt Romney Pick Ron Paul as His VP? 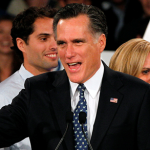 I just read an article on Infowars.com about how a Republican strategist has predicted that Ron Paul will be on the Republican ticket in November. He predicted that Romney is the favorite, but that Paul could still win the nomination without carrying a single state.

If Romney were to win, the strategist predicted that he would be forced to pick Paul as his VP, as Romney may not carry enough votes to win the nomination outright. In other words, he’d have to cut a deal to officially win.

On 1 hand, this would make sense to me, as having Paul as his VP would lock in a load of Ron Paul supporters who otherwise would vote for someone like Gary Johnson. Also, Paul could act as Romney’s bulletproof vest, as no “Lone gunman” would want Paul at the helm.

On the other hand, would the establishment’s favorite candidate really want Paul that close to the Oval Office? If anything were to happen to Romney or Paul were able to use his power to dig deep, the house of cards could come tumbling down.

What do you think?