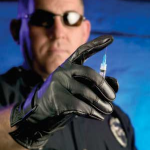 When I heard of the death of prominent conservative Andrew Breitbart, I thought it was a bit odd that he died of “Natural causes” at age 43. However, I did not know that he was about to release damning footage regarding Obama’s ties to Communist radicals, which has blown this thing wide open for me.

Other than his strange death, his statement 3 weeks ago of “Wait ‘til they see what happens March 1st” – the date of his death – is even more damning. Did he just happen to die that day or did someone take him out to prevent a PR nightmare for Obama?

I can’t say for sure that he was killed, but an unbiased investigator would be a fool to ignore this possibility. Of course, there will never be a fair investigation into this, as there never is with politically-connected deaths. Even JFK has never had a just investigation into his death – an obvious inside job – despite holding the highest office in the land.

There appear to be evil forces at work here in America, and this could be just another manifestation of their will to stay in power by any means necessary.