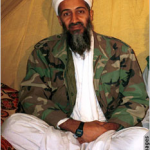 According to emails released by Wikileaks, Osama Bin Laden’s body may not have been dumped at sea after all. Well you could have knocked me over with a feather!

Of course, the official story is that an elderly man on dialysis survived a bombing campaign by the world’s strongest airforce in the mountains of Afghanistan. His “Confession” to the world regarding his role in 9/11 was magically found and was released on the day some day he died. This can’t be true, as there would have been no reason to go to war in the Middle East had he really died, right?

A few faked videos (according to the top US expert on Bin Laden) came out after his alleged death – videos that were labeled as “Authentic” by the CIA and their lamestream media lapdogs. For those who don’t believe that this is possible, you don’t believe that Tom Hanks spoke with JFK in Forrest Gump, do you?

What’s my take on this? They’ve been lying about Bin Laden’s status for 11 years. It’s anyone’s guess, but Bin Laden may have been long dead – a perfect patsy for 9/11 and a false target for endless war.