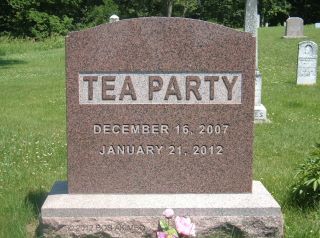 There’s a proclamation being shouted across the land. Have you heard it? The Tea Party is dead. This declaration is being put forth by a variety of dubious sources. It comes from agenda driven liberals, the Republican establishment and uninformed bloggers. This presumption is based upon intentional misinformation by those with an agenda and it is based upon faulty analysis by those that don’t.

It has been three years since the movement first burst onto the national scene. After dominating the headlines for more than a year, the movement, according to these babbling bloggers, has wilted and died. There is no credible evidence presented, no autopsy report, no cause of death explained. No, apparently the pronouncement is based upon the shallow and amateurish observation that, after last year’s debt ceiling showdown, there is a lack of headlines.

To us, living in the age of 24/7 news cycle and having information accessible in seconds via the internet, three years seems like a long time. And therein, lies the rub. To fill this absolutely massive niche, the media, to stay relevant and survive, has been forced to change. The mission now is to have something, anything, out there to be consumed. True journalism, based upon investigation, corroboration and objectivity has devolved into opinion-ism. The journalist has been forced to make room for the spin-doctor and the interview has been replaced by shouting matches. Today it is far more important to have something to actually publish than something to actually say. No, a lack of silly, ultimately meaningless headlines thrust upon us by movement haters with an agenda, does not prove the movement is dead. Uncountable government policies have been approved or rejected without the appropriate headlines. It doesn’t mean they aren’t real. Furthermore, a lack of public presence as a result of less rallies doesn’t mean it’s dead. A lack of rallies can be interpreted another way, that marches and speeches were fine to start but it is time to get down to business (we’ll explore this shortly).

The Tea Party is not a political party. It is a movement. It is a collection of vastly different folks from across this massive country, with a handful of common ideas and concerns. From a political perspective this is a weakness because the movement lacks cohesion, can send mixed messages and has no leader to serve as a rallying point. But it is also a strength. A leaderless movement, lacking a specific target, is less vulnerable to attack. Ask yourself, just how many headlines, articles and interviews can be presented with sweeping generalizations about the movement being racist before it becomes repetitive and boring? You see, there comes a point of diminishing returns. If you are in the business of attracting an audience being repetitive and mundane is a fatal flaw.

One can present the idea, and I will, that the Republican administrations of the Bush boys, were embarrassing, if not insulting, to many registered Republicans. Add the Democratic administrations of Clinton and Obama and you have a situation wherein, Republican conservatives have been getting their butt kicked for some twenty years. How much political correctness and nanny-state policy do Democrat and the Republican establishment expect them to endure? Is it any wonder that Obama’s national health-care, ridiculous spending and intentional disregard for the Constitution set them off?

Enduring two decades of insult is painful. But it is also educational. Many valuable lessons can be learned from twenty years of disregard. And conservatives have learned one of the most important: you start from the ground up. Most on the left refuse to believe conservatives have any staying power because they see them as nothing more than red-necks, racists or religious zealots clinging to their guns and Bibles. But the Republican establishment knows the truth, and they are concerned. You don’t dust-off a relic like Bob Dole during the primary season unless you’re feeling threatened. And as further proof, I’ll remind you of the 2010 elections.

Take a survey from the American people about those elections and far too many won’t know anything about them. Some, a bit more informed, will respond correctly, that it was eye-opening because of the change in the House. Republicans needed 39 Democratic seats to win back the U.S. House and almost doubled it, exceeding the goal easily. Other Americans, even better informed, realize that in the Senate, Republicans fell just three seats short of taking control. This occurred, of course, under the umbrella of a liberal president supposedly “given a mandate for change” from the people. Yet, even this is a surface level understanding of what actually happened during November, 2010.

The reality being hidden from the American people by liberal-leaning media, and rarely touched upon by babbling bloggers, is the fact that the 2010 elections were an utter disaster for Democrats, going way beyond losing the House and being threatened in the Senate. Fueled by the conservative movement, Republicans gained 680 seats in state legislative races. Republicans now control 25 state legislatures compared to 15 controlled by Democrats. Five states switched to GOP control in both chambers and Republicans took control of 29 of the 50 State Governorships. Clearly, this sounds a little more significant than just “Republicans won the House”, yes? Let’s not forget, a big bonus from massive legislative wins means having the ability to redraw Congressional districts. This makes it much more difficult for targeted incumbents to get re-elected. You don’t think Barney Frank is retiring because he’s tired of power, do you? He’s jumping from a sinking ship. Eighteen Democrats have announced they are retiring. Why? Could it be that, like Barney Frank, most of them see the writing on the wall?

However, as a fledgling movement based upon principle and ideas, not on candidate names, conservatives often found themselves in a tight spot. Do you choose an established politician or an inexperienced newcomer as your candidate? So, mistakes were made. But another valuable lesson was learned. It is important not to rush, to take your time and develop your candidates. The ideas from the movement are applied to the candidate, not the other way around. And that is why the Republican establishment as much as the left, would like you to believe the Tea Party is dead. Career Republican politicians know they are in peril. If they maintain the status quo, and the conservative movement pushes forward, they are on the chopping block. It is better for them to try and discredit it and stop it now, while it is in its infancy.

In order to establish meaningful change, not just some junker policy passed to shut the public up, you must start at the bottom. You build the foundation of a house first, then install walls and a roof. In nature, plants send down roots before stems and flowers. Already, just 13 months removed from the mid-terms we are seeing changes. Do not be fooled by the lefties and their constant whining of grid-lock. In order to turn around a runaway train the first thing you need to do is stop it. But there is more. We see significant budget, union-busting, and voter-fraud movements from states and cities throughout the country. I ask you, seriously, what was expected from the Tea Party within a year or two, a president? Not likely.

At this stage, the focus must be recruiting volunteers, holding seminars and examining legislation on the local and state levels. This is not glamorous and it is certainly not headline material for NBC. But it is necessary. The conservative movement is seeking a change in the country. And with enough change at the local and state levels a conservative presidency will come. It will be inevitable.

The reality is the conservative movement, symbolized by the Tea Party, is not dead. It is being ignored by those that won’t acknowledge it in hopes that, by doing so, it will fade away. It is also being hidden from you by those that fear it and it is being done an injustice by uninformed, babbling bloggers. If the Tea Party movement is dead why is the conservative influence so palatable? We know it is because RINO Mitt Romney talks of dumping Obama-care while on the other side of the stage, thirty year, belt-way insider Newt Gingrich is talking about chopping government agencies. There is no doubt, Tea Party members would enjoy a true conservative candidate. But they also clearly understand that there exists degrees of preference. A conservative candidate is better than a moderate, a moderate better than a RINO. And as for the presidency, a Republican is preferable to a Democrat. And therefore, it is an electable Republican president that is the important goal this year. A conservative would be ideal but is not absolutely critical because the reality is, all of the current Republican candidates know to whom they must answer.