This could happen in America 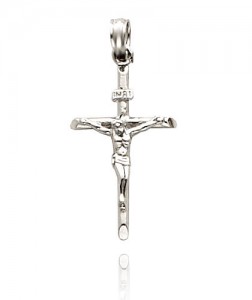 a>America has a long and important history of keeping a line between church and state. It’s one of the cornerstones of the Constitution.

Admittedly, over the years the “separation” has come to mean – to many, especially on the left – that there should be no religion whatsoever in America. That saying “under God” is offensive. That the Ten Commandments – the law upon which all other laws in the West are based – should be removed from the public eye. That Tim Tebow should be burned for a witch.

Of course, that only applies to Christianity. You’d never see a ban on Islam, even though it poses a danger to the security of America.

Well, it’s even worse in the United Kingdom, where the government itself is arguing in court that Christians have no right to wear the crucifix.

The Strasbourg case hinges on whether human rights laws protect the right to wear a cross or crucifix at work under Article 9 of the European Convention on Human Rights.

The Christian women bringing the case, Nadia Eweida and Shirley Chaplin, claim that they were discriminated against when their employers barred them from wearing the symbols.

They want the European Court to rule that this breached their human right to manifest their religion.

The Government’s official response states that wearing the cross is not a “requirement of the faith” and therefore does not fall under the remit of Article 9.

So there ya go. The hijab is safe – even though that too is not required and many women opt out of wearing it. Your crucifix though? Get thee behind me, Catholic!

The significance of this case isn’t that someone is fighting against the right to wear a cross at work. It’s that the someone is the government itself.

Keep embracing leftitst ideology, America, and this will happen here.