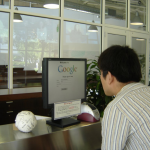 How often to you hear someone say “Just Google it” or something similar? It’s as if Google is the only search engine out there, even though there are plenty of others.

I rarely use Google. In fact, I only use it when there is no other good option, as they have certain features that other search engines don’t offer. I avoid them because of their history of censorship, which I refuse to support.

My avoidance of Google was already set before I read this article. I wasn’t previously aware that Google was in bed with the intelligence community, although I’ve presumed for quite a while that this was a likely scenario. After all, how could an unethical, immoral head of any spy agency not drool over Google’s capabilities?

With all of Google’s shady activities, I suggest avoiding the site for your own privacy concerns and for ethical reasons.