Did the Spartans Fight For Freedom or Statism? 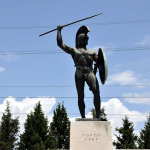 Alright, my knowledge of the Battle of Thermopylae is from a mixture of historical facts and the film 300. Basically, I believe that the film was loosely based on the facts and hit the key points well.

A major theme in the film version of this battle was that the Spartans were fighting for their freedoms. However, I found it odd that a “Free” society found it necessary to determine each person’s fate at birth. Also, the entire film seemed to revolve around people serving the state, not living freely. Remember the line “Sparta will need sons” as Leonidas marched his men on what was obviously a suicide mission for the state?

Your worth is decided by the state and, if you are privileged enough to be permitted to live past birth, you should be willing to sacrifice your life for it – that’s the message I took from that film. Sorry to be such a downer on an otherwise good film, but I sometimes wonder if Ahmadinejad was right when he labeled it as propaganda.