Romney is the Most Unpopular Presidential Candidate in a Generation 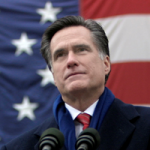 The Daily Best reports that Mitt Romney is the most unpopular Presidential candidate in a generation. Their analysis concludes that his chances of winning the Presidency aren’t very good.

This is in line with my experiences. To this day, I have yet to meet a Mitt Romney supporter. Oddly enough, I literally only know 1 voter who plans to vote for anyone but Ron Paul. Maybe I don’t know enough brainwashed people?

It looks like we’re cruising to the Presidential election version of Bud Bowl. We’ll probably have Obama versus Obama Lite. It will be like the 2004 election with a warmongering incumbent versus a flip-flopper. Those who simply refuse to vote for a non-mainstream candidate will have the choice of our current path of total destruction versus a slightly prolonged path with Romney.