Why Do Leftists Hate Us So Much, Or: Grow Up, Conservatism 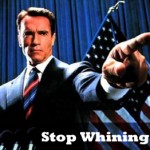 How long will conservatives talk around the issues? Let’s analyze some questions seen over and over again in the conservative community (online) and just answer them.

Why do leftists hate us so much?

It’s a simple answer: a complete dissection between intent and methods.

What matters to you? It’s a simple but difficult question. Ask it. Be damned serious about your answer. What is at stake in society today is not based on your feelings. Your importance to correcting our cultural problem will fall somewhere around what you’re willing to sacrifice, as with any conflict, and will have nothing to do with your feelings. Does it matter to you, beyond simply having your feelings hurt, that Western society is headed toward the dustbin of history?

Why can’t we just get along? Do we have to continue this infighting?

I’ve recently changed my own opinion about this, having really calculated what’s at stake culturally. We can’t get along because, again, the Unconstrained view of man is at odds with the Constrained view, and sadly many conservatives have bought too many lies about our own conservatism. Yes, we’ll have to continue this infighting until the people not needed to change our culture give up fighting for the wrong things. Brace yourself: this may take a while.

Shouldn’t we as conservatives be concerned about “gay rights?”

Not in the least. At least, not in the sense you’re told to be concerned.

As a conservative, your concern about rights are not to be based on identity politics. You shouldn’t care about GOProud because GOProud should be shaming the very notion of identity politics and assimilating into the conservative culture. Whether or not the homosexual life style can be coupled with conservatism is a post for another time. However, identity politics, in case you’ve forgotten, are what got us into this mess. Identity politics are based on leftist ideologies. The brilliance of cultural Marxism in manipulating a society comes down to the notion that we should treat people deemed different as special. This is incorrect and, furthermore, from the conservative perspective, immoral. Despite all the genuflecting by so many conservatives about wanting everyone to be equal, identity politics continue to pollute the discourse. Are homosexuals equal to other human beings based on the Constrained view? Yes. That’s enough, or rather, it should be. Once again, this debate rages on mostly by way of feelings.

Is Western culture more free, more enlightened, more forgiving, more tolerant than some other cultures on our planet?

Don’t apologize for this fact. And it is a fact. The reams of data showing the crime and actual hatred in other cultures around the world do not debate this, they simply prove it. This is not an argument to be based on feelings or emotion. Stop apologizing. And, in case you’ve forgotten, cultural Marxism is targeted directly at Western culture. The goal of cultural Marxism is the same goal as economic Marxism: tear down the West. Tear down the prosperity. Tear down the equality. Tear it all down because, once it’s destroyed, the all-knowing, all-seeing Elites will guide us into the Utopia of a worker’s paradise, where our government somehow does for those who cannot do for themselves. This is not oversimplified. Just read Marx or check out critical theory.

Should a territory wishing to seek statehood in the U.S. be required to have English as a first language?

Yes. How is this a serious question?

But isn’t social conservatism an invalid way to repair society’s ills? It can’t function in today’s more evolved world, can it?

No, it’s no more invalid than the first principles this nation was founded upon.

The entire point of social conservatism should be that all men and women are created equal, and we are all flawed. We all have innate motivations toward aberrant behavior, selfishness, pride, ego and lawlessness. Social conservatism understands that laws must be put in place that make the best effort at maintaining law & order, and a semblance of moral structure to society all the while staying as out of the way as possible so that the citizen can prosper within a limited set of rules. The goal is to keep us out of our own way. Don’t take your views of social conservatism from some of the poorer past examples from the so-called ‘Religious Right.’ Go back and read what the founding fathers intended. Then, when you’re done with that, go read the reams of historical data that prove, over and again, that the principles our country were founded upon not only hold up to scrutiny, but are so successful as to cause cultural Marxists to work day and night in order to break them down.

It’s time conservatives weed out the wheat and the chaff. It’s time conservatives stopped self-loathing, re-familiarize with conservative and first principles and get out there and change the culture. Don’t listen to the nonsensical hyperbole about your conservative views. No matter how many times you may hear about how those horrible conservatives want to put us in the backwoods of 1959 remember this is patently false. Don’t be apologetic about believing the truth. Don’t be led into superfluous discussions whereby everything from Detroit’s auto industry to back-alley abortions are correlated into impossible moving targets.

Liberty is not simple. Freedom is costly. Are you really willing to sit there and be quiet so your feelings don’t get hurt as our culture continues its path toward becoming no more than data in our history?