Constitution Set to Die Next Year

Schedule a day off next year for the Constitution’s funeral. 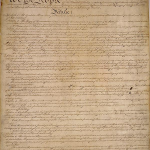 The NSA’s Utah Data Center (UDC) is set to become fully operational in 2013. The facility is supposedly going to be capable of monitoring just about every aspect of your life, including transactions, phone calls and Internet activity.

We are approaching the point of no return. Let’s face it, Ron Paul has only a remote chance of being our next President, and I simply don’t believe that he’d last long if he somehow won. What are the chances that at least 1 powerful person or group wouldn’t, well, change things as he began to disassemble the current elitist empire?

So, it looks like the beginning of the final stages of what was once a free nation. What’s truly sad is that finally have a major candidate who could hold off or even begin to reverse this course and too many Americans have their heads stuck in the sand – or television – to get it.