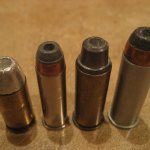 The Department of Homeland Security will acquire up to 450 million hollow point bullets over the next 5 years. Such bullets are typically more lethal than regular bullets, which raises the question of just what the DHS is preparing for. Also, they are seeking up to 175 million rifle bullets of a caliber that is nearly identical to those used by NATO forces.

So, the DHS will acquire up to 625 million rather potent bullets in the coming years. What for? To scare off OWS protestors? Doubtful. This all points to an increasingly gloomy scenario and what sure looks like a total takeover in the near future. See my recent posts here, here and here along with the various other accounts of strange occurrences and ask yourself if everything that is happening is coincidental or if something much more nefarious is taking shape.