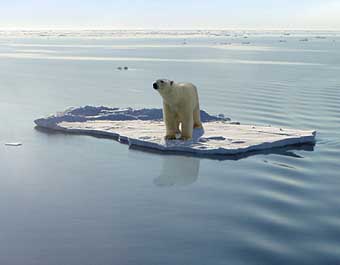 For years, the Global Warming Alarmists™ have been using the image of the Arctic Polar Bear to make their case for your money, trading on your hysteria over the cute and fluffy killers of the North.

Alas, like most things the Inconvenient Bullshit crowd have told you, the dearth of polar bears is also a lie.

Nunavut says a new survey shows Canada’s polar bear population hasn’t significantly declined in the last seven years as predicted and that the iconic mammal has not been hurt by climate change.

An aerial survey done in August by the Nunavut government, in response to pressure from Inuit, estimated the western Hudson Bay bear population at around 1,000.

That’s about the same number of bears found in a more detailed study done in 2004. That study, which physically tagged the bears, predicted the number would decline to about 650 by 2011.

Last year’s survey found fewer cubs — about 50 — than in previous years, but officials say the new figures show the “doom-and-gloom” predictions of environmentalists about the demise of the polar bear have failed to come true.

I’ve been saying for years, regarding Al Gore, David Suzuki (who originally made his name and fortune during the global cooling hysteria of the 70s and early 80s) and their ilk that it is an arrogant man who thinks he can control the weather.

Believe me, if the world as we know it is fated to become uninhabitable, then President Obama spending billions of taxpayer dollars to have electric cars built in Finland isn’t going to change a damn thing.

A few years back some lefty gave me a Hyperbole Award for an article I’d written about demographics. The prize was a book: Extraordinary Popular Delusions and The Madness of Crowds

. The subject is mass hysteria over the centuries, over things like alchemy, stock market runs, and the Tulip bubble.

This book should be required reading in the context of global warming, in that it’s just the latest fad to extort money out of groups of easily led people. A century from now – if not sooner – when that book is updated again, you can bet that Man-made Global Warming will be among the subjects discussed.