When activism and science don’t agree

A couple of weeks ago I did a post on eco-nonsense versus actual results-based science. There’s big money to be made in creating a fake problem, fanning the flames of hysteria, and selling a fake solution. Turn it into a crusade, lean back, and wait for the money to roll in as it becomes more and more accepted by society as the norm. 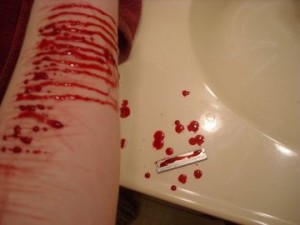 retards – and not coincidentally) is creating the same societal normalcy for another fake science: sexual and gender identity.

I have long maintained that sex-change ops are an outcropping of self-loathing behavior like cutting, burning, skin bleaching (for dark-skinned people) or other forms of self-mutilation. You aren’t comfortable in your own skin, so you attempt to cut yourself out of it.

While people who self-cut or self-burn are offered therapy (as well they should be), those who tattoo excessively, sexually mutilate under the guise of gender identity, or overdo plastic surgery (including skin bleaching) are tolerated and even encouraged by society.

Sitting at home with a razor blade doesn’t line anyone’s pockets, except maybe the Gillette company, if you’re using disposables. But going to a derm to get bleached or tucked, or to a hospital to have your dick cut off, is all acceptable practice. Because you’re paying someone to do it, and they have a vested interest in encouraging you.

I read this article over at the Beloved Daily Mail™, and thought “It’s about bloody time! Now if only someone would mention sexual mutilation…”

Plastic surgery that drastically changes a person’s appearance can have detrimental effects on their sense of identity.

According to U.S. psychologists, people tend to overlook the attachment they have to their facial characteristics.

Dr. Z. Paul Lorenc, author of A Little Work: Behind the Doors of a Park Avenue Plastic Surgeon, said only a small number of patients stipulate that they want their eyes or smile to look the same after their surgery.

However the majority of patients say the opposite, that rather than looking like a better version of themselves, they want to look like a certain actor or model.

This indicates an inherent desire to become somebody else, a famous person who, in the patient’s mind, lives a problem free, seemingly perfect-looking life.

You know what else qualifies as a red flag? Wanting to cut your genitals off! Transgender people make no secret of the fact that they hate the bodies they were born into. Yet instead of offering the same help society would give to a cutter, they are encouraged to dramatically alter their life course by indulging their self-hatred. For someone else’s profit.

There are many groups that scream about the evils of Big Pharma and their hold over society. Why isn’t the clipping and altering of genitals given the same scrutiny?