A generation of Bubble Boys! 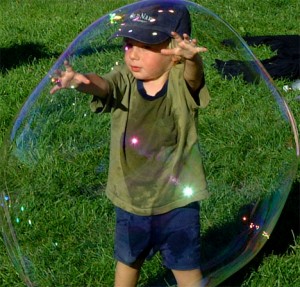 No, this isn’t a “get off my lawn!” rant. It’s not the kids that are wrong – it’s the weak-livered, cowardly parents.

Police say a 10-year-old boy made his way through half a rum cocktail at an Olive Garden in Indianapolis before the waitress realized her mistake. His family said he wasn’t acting like his normal self. Booze will have that effect.

Local WISH News says the boy’s mom had ordered him a kid’s drink, a Wildberry Frullato. But the waitress accidentally dropped off a four-ounce rum drink in front of the boy, and he proceeded to drink half of it. No adults at the table had ordered alcohol.

The waitress realized she had done something wrong and told her supervisor. His mom says management assured her the boy would be fine, but the family took him to a local hospital. Alcohol was discovered in his system, and an officer at the hospital said the boy seemed “shaken up” but “alert.”

A hospital? For half a daiquiri? Seriously? Calm down, people!

I was a child of the 70s. Growing up, we had a cottage in the mountains. My parents and their friends were always together, and that’s how I met my childhood best friend. One of our favorite escapades was to drain the rye glasses on the table when our parents weren’t paying attention. My, how they marvelled at how well us wee cherubs slept in the fresh country air! We were all of about three years old at the time, and precocious enough to also spend a great deal of time raiding the medicine cabinet.

When we drank rye, we slept well and had mild hangovers. When we overdosed, our parents dosed us with ipecac and kept an eye on us. Occasionally we made a trip to the local hospital, 40 miles away, just to be safe, but that wasn’t routine.

Kids are resilient. They’re designed that way, because they’re also generally stupid, which means they’re going to put themselves into risky situations.

Half a watered-down drink at Olive Garden isn’t going to ruin Junior’s chances at a Big Ten school. Chill out and enjoy the fact that he’ll sleep soundly.