The Feds Are Going After Ted Nugent’s Guns 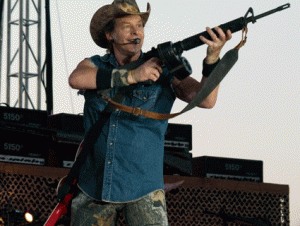 I’m sure by now many of you have already read about Ted Nugent receiving a visit from the secret service over some remarks he had made at the last NRA convention.  We know our government loves to make an example of big names with opposing view points, so why wouldn’t they pay Teddy a little visit.

However, there has been another story, not nearly as big as the secret service visit, regarding Ted killing one too many black bears while hunting in Alaska.  When I first heard about this story, I didn’t think too much of it.  It wasn’t until I heard Ted Nugent on the Glenn Beck radio show explaining some of the finer details, that I realized what the federal government is attempting to do.

You see, Ted’s hunting mistake was made on the account of their being nearly no understanding of the law in place by anyone in the current state government.  Even the judge overseeing the original hearing had commented that he had no clue of the law.  Furthermore, the state was not intending to go after Nugent in the first place.  Turns out, it was the federal government rearing its ugly head in to the arena, attempting to charge Ted Nugent with the crime.

So what does this have to do with going after Ted Nugent’s guns?  If Ted is convicted, he will be considered a felon, and as such, would lose his right to keep and bear arms (among many other rights he would lose).  What better anti-gun example to make than that?

Luckily, there is very little evidence to actually convict Ted Nugent of any real crime, but we all know that may not stop the big bully government from reaching its goals.  Here’s hoping the judge in this case uses his brain.
Follow Blake on Twitter @BlakeOates and visit his personal blog at www.ExpMed.net