My culture IS better than your culture 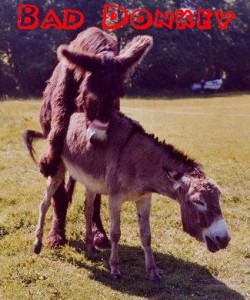 I must once again entertain and enlighten you, my darling readers, with tales from afar.

Remember, our moral and social betters would have us believe that all cultures are equal and relevant, and that no one is better than anyone else.

Fifteen people were killed or injured in tribal fighting in Yemen after a male donkey chased an ass and raped it just near the house of its owner.

Newspapers in Yemen said the owner of the ass got mad after he saw the donkey attacking his animal, prompting him to chase the donkey and hit it.

The attack infuriated the donkey owner, who called his armed tribe men and asked them to take revenge.

“The problem snowballed into an armed fight between Makabis tribe, which owns the donkey, and Bani Abbas which owns the ass…15 people were either killed or injured in the battle,” the Saudi Arabic language daily Aleqtisadiah said, quoting newspapers in Yemen.

Look, I get it. No one wants to get raped in the ass. But… A tribal war? Over a donkey?

Perhaps one of the locals was dating her, and got jealous.