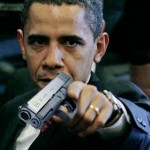 I find it very interesting that the New York Times of all papers, likely one of the staunchest supporters of Obama, could possibly see that the fact that our commander-in-chief is personally gunning down unarmed targets from on high is actually a “good thing” and something to be reported to the world. Glad that they did, though.

The fact that they are so in love with the man that they cannot possibly fathom the true depths of depravity which he is stooping to, and in some reports, actually enjoys. Their blindness of how wonderful the savior is in all things actually helps to reveal the darker side of his nature, something that they cannot see, but we can immediately grasp.

They can’t possibly see the extension of what he is doing into the United States itself. They can’t possibly see, or maybe they secretly hope, that our savior will begin to start using these drones on Americans within the US. Maybe starting with Scott Walker? Great role model for future Nobel “Peace” Prize winners to aspire to, eh, locked up in their offices watching people die, as if it were Call of Duty on his Xbox.

Where is his vaunted United Nations now? Will they try Obama for murder of innocents in world court when we makes the call to target that truck, also occupied by innocent family and friends? Does he really think that eradicating a potential terrorist and his/her family will really pave a path to peace?

It’s amazing, or not, that Obama whacking U.S. citizens without any sort of due process is getting only the most cursory coverage — imagine the pearl-clutching if Bush had done this — so I thought I’d run this fine Real News Network interview with CIA whistleblower Ray McGovern, before the whole issue goes down the memory hole and the idea that the Chief Magistrate of the United States can wake up in the morning and order you or me hit because he thinks that would be a good idea becomes completely normalized. I mean, putting the “execute” in “executive,” or what?