Obama And Democrats Try To Supress Votes In Swing State 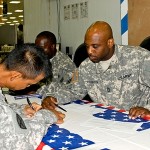 In short, isn’t it Republicans that want to secretly strip certain citizens of their right to vote?

Guess again, crusaders, because apparently we got that all wrong. It’s Democrats. And the proof is in a lawsuit.

The Obama campaign, the Democratic party in Ohio and the DNC have all joined forces to try and strike down a Ohio state law that grants members of the military a few extra days to vote.

Given military deployments, exercises and other demands placed upon the people actually responsible for the nation’s protection, it seems reasonable to offer men and women in the armed forces a few extra days to cast a vote, yes?

Nope. Not according to Democrats. They disagree and feel the law has “no discernible rational basis.”

Don’t you find it interesting how looming military cuts, a 2012 swing state, and Obama’s re-election campaign all come together to create a sudden need to address an Ohio voting law because it has no rational basis?

We’ll skip discussing the well known disdain for Obama within the military.

This is nothing more than a devious, dastardly and despicable attempt at voter suppression against a population – military men and women – that should be given as much flexibility to vote as can be reasonably legislated.