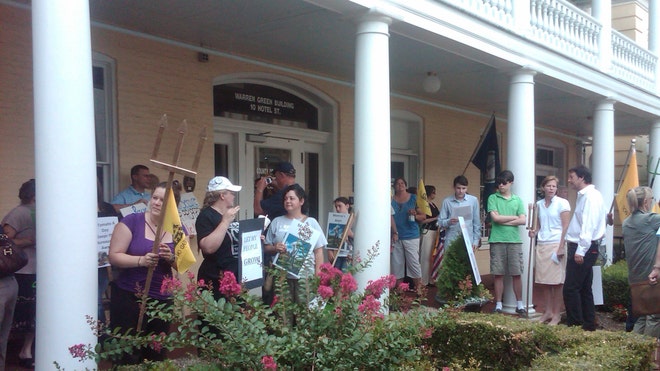 I love civil disobedience and citizen anger over ‘Government Gone Wild’. Last week it was a story about a Vermont farmer who flattened 5 police cruisers with his tractor because the police arrested him for possession of pot, here.

This week a group of angry Virginia farmers showed up with their pitchforks to protest the government threatening a farmer with arrest and $5,000 in fines for the ‘crime’ of holding a child’s birthday party.

Pitchfork-wielding Virginia farmers rallied to support a woman who claims local officials came down on her for, among other things, hosting a children’s birthday party on her spread.

Martha Boneta, owner of Liberty Farms in the northern village of Paris, was threatened with nearly $5,000 in fines when for selling produce and crafts and throwing unlicensed events, including a birthday party for her best friend’s child. She told FoxNews.com she wasn’t doing anything are farmers haven’t done for generations, and at a recent zoning board meeting,