Never You Mind the Fork 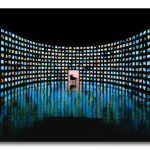 The revolution will not be televised. The gay sex, pro-abortion, pro-amoral, pro-infidelity, pro-let’s-hate-them-damn-rich-asshole agendas pushed with less tact every day will be televised.

All the time, constantly, twenty-four hours a day, etc.

I find myself at times quite bitter about the willful decline of Western society. It’s something I now have to keep a constant check on, else I’ll become the guy I don’t really care for who spends too much time angry. But it does get to me: the self-loathing hypocrisy of a culture who wants to have everything until we have it. At which point we no longer want it. The tail-chasing moralization of every aspect of the ugly, human condition except for the most important aspects. The new societal ‘norms’ are so convoluted and impossible to follow that one needs flash cards and several indices of who/what/where/how/when/whose feelings will get hurt in order to simply navigate the landscape of  normal, daily life—let alone trying to figure it all out intellectually so that one might be able to craft some sort of coherent set of principles by which to live.

We’ve killed over fifty million babies since 1973 in the US alone. No biggie. We bitch about our Netflix accounts running slow or our smart phones not picking up a signal. We write about Joe Biden’s nonsense while lives without even the chance to decide for themselves if they want to continue existing are snuffed out. Still we marvel at ourselves for the ingenuity of a “Like” button on something as silly as Facebook. And our entertainment. We just love being entertained.

The left is so brilliant at moving the culture along that, as my friend Chris B. pointed out, they’re now just openly admitting their biases. The left (instinctively, it seems) understands the pulse of our culture to a degree that shames the right. As the linked article states, liberal thinking has been the bastion of Hollywood for decades now. Every person that’s had the misfortune of being referred to as over-reacting or stepping into conspiracy nonsense concerning their grasp of the obvious attempts (and successes) at manipulating Western society through entertainment need only read that article to be vindicated. It is a rare moment of intellectual honesty as to the scope and degree of leftist influence on Western society throughout the last century and continuing into this new one.

Why suddenly admit this? This is what Chris B. reminded me of in our discussion of the article. Why suddenly own up to what the Breitbart sites have been hammering us with for years—that yes there is a vast manipulation of Western culture happening through our entertainment? One has to come to the conclusion, based on the history of the left in Western society, that it is because it is understood now the level of disillusionment in our culture now allows for such an admission. We have, essentially, reached an apex in our culture whereupon those who might have been hiding in plain sight simply step into the light and claim the mantle we’ve pinned on them because, to simplify the whole thing: why not?

We are ready. Our betters have informed us of the obligation we must have to loathe our prosperity for decades. Instead of paying attention to the subtext, we were entertained. To boredom. There’s an old Proverb that clearly puts our predicament into clear focus and I’ll paraphrase: without a vision, the culture, the people, civilized society itself dies. Our vision has been stripped from us through being entertained to the point of utter boredom. We’ve accepted the narrative (at least to the point of being sick of hearing it to boredom): Yes, we’re awful. Yes, America apparently is an empirical nation set on war for oil or just war in general, pick a reason. Yes, those old, traditional notions of morality are dated and incongruous with such an enlightened people. Can we move on? I paid ten dollars to see this movie.

It wasn’t as if clear-thinking people bought the premise. But we sure as hell bought tickets. And subscribed to overpriced entertainment channels on our TVs. And we rent film after film that insults us, we watch shows on TV that don’t just insult the faculties of anyone with principles and morals—they run roughshod over those things like a derailed train running through New York City flattening cars. But damn, it’s entertaining.

I don’t care to see completely right-wing entertainment. I care to see entertainment with some semblance of morality and decency. I don’t want to politicize every film I decide to pay a ridiculous price to see. Entertainment is not an unimportant aspect of life. I spend many hours on weekends entertaining people through music. The problem is that our culture has been manipulated (and it wasn’t coerced—we opted to be entertained) into living entertainment-based lives. We don’t know how to quiet down. We don’t know how to turn our own idiot boxes (a term I also apply to smart phones, computers and tablets now) to the “off” position and just think for ourselves. We are being entertained to death. To the point that it is now necessary to choose one of a few paths in order to maintain some semblance of sanity and self-preservation. We are now nearly forced to see everything through the dung-colored lenses of hyper-politicization. Because we allowed notions contrary to those of a civil society to permeate our cultural landscape it now behooves us to pay attention to every single message we allow into our brain through entertainment.

I find this to be more than a bit sad. But feelings really have no merit anymore in terms of minding our sanity. It’s too bad it’s come to such a fatalist point but if society is to ever correct her course we have to set our precious, precious feelings aside and begin making much smarter choices in what we allow to distract us. If the left understands one thing in terms of manipulating society it is that distraction is key. Paramount. As soon as society attempts to make any moral issue concrete in our minds, we are distracted by our entertainers. Like cats in a roomful of mice, we just don’t know what to focus on at any given moment. It’s a brilliant way to keep a society from solidifying cultural norms based on any kind of traditional morality.

Our entertainment mediums are no longer for healthy escapism–they are for pushing agendas. What was once termed “rock and roll” has become a complete disappointment. It is no longer anti-establishment from a personal-freedom standpoint. It is establishment, conformist tripe not worthy of the money we plunk down so willingly. Sure, look underground—you can find the artists who see life through something akin to reality. But it’s rare. The point is not in the fact that it can still be found—the point is that the entire enterprise has given way to pointless, feelings-based nonsense to a degree that one has to hunt for something with substance.

But we just love ourselves right to death. It isn’t love in the sense of the hard choices. It isn’t love in the sense of dealing honestly with ourselves and others. It is a twisted, self-referential love that freezes us into submission whether we want it such or not. We want so badly to be free of the plain deadly ideas thrown at us constantly by our entertainment. Yet we cannot accept that what we’ve created is utterly toxic to our civil society and everything it once represented. It is now nigh-on impossible to be a casual spectator in the sport of entertainment. We want the cake, we want it to taste good, we want it to be there in a hurry and we believe we can pick at it and not be affected by the toxicity. We want to believe we can change our culture by ranting incessantly (kind of like this).

We can’t. A cultural change comes from within. We have allowed the beast of our entertainment to consume every iota of who we once were. I’m certain you’ve read it written by other, much more qualified writers that we once looked to space, the moon and how we could get there.

Now, we just film it in IMAX and pat ourselves on the back for getting so many pixels on a screen.

How do we change our culture? We admit we’re in trouble. Which I think many have already with much more grace than this rant. We continue to get right ideas out through the internet. We hope for a better tomorrow. But hope isn’t a wish-fulfillment device. Hope is something that requires action. We hope that someday these idiots won’t be the ones entertaining us and we can go back to just being decent human beings who understand the uglier aspects of humanity and try and change them as best we can within the limited confines of our lives. That isn’t enough. What are we willing to do in order to make things happen? Are we willing to fall out of this toxic, self-aggrandizing love with ourselves in order to actually change things?

Or are we now actual slaves to the things that entertain us and shape our worldview? I know how I’ve chosen to change a few things in the tiny life I live—I’ve not had a signal into my television for years. I recently turned off internet to my computers. Each thing that wants my attention from an entertainment aspect I analyze deeply. It is “fun?” Not per sé. It’s not for everyone. But changing our culture is going to require a simple but damn near hated concept in Western society now: sacrifice. All of us who believe in traditional forms of morality (let it be said also I do not subscribe to legislated morality) and decency will have to choose where we make our sacrifices. But make them we must.