The casual racism of goats 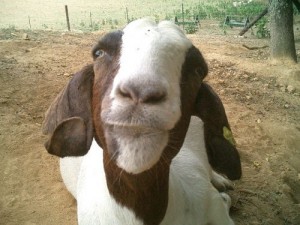 I’m a carny. Seriously. Once every month or so, I hitch my wagon up with a local farm, and go to county fairs to run petting zoos and pony rides. Laugh if you will, but it’s the most rewarding job I’ve ever had. No corporate assholes, no stress, low overhead; only smiling children and well-fed ruminants.

When I was out in the Ottawa area last weekend, I noticed something that resonated with me. All the pygmy goats were clustered together. Same with the nubians, the angoras, and the boers. Each sub-species stayed with their own.

Yet in humanity’s la-la land, we’re told that racism is bad, and learned, and can be unlearned.

While I don’t dispute that it can be unlearned – or at least ignored, faked, or otherwise quashed – I believe that on some level it must be inherent.

Our goats (those of the farmer I work for) are all pretty much the same. They eat the same, digest the same, sleep in the same barn… Why do they separate themselves so?

Why do the pygmies only play and butt heads with other pygmies? Why do the angoras sleep in a woolly heap together, separated from the other types of goats? Why is there so little cross-breeding between the sub-species?

Perhaps instead of playing on white liberal guilt, sociologists should spend a little time with our goats, to maybe understand that whitey isn’t an aberration  by being racist. In fact, I would say we’re an aberration by attempting not to be.