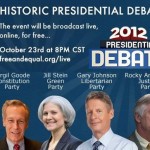 “How did we win the election in the year 2000? We talked about a humble foreign policy: No nation-building; don’t police the world. That’s conservative, it’s Republican, it’s pro-American – it follows the founding fathers. And, besides, it follows the Constitution.” – Ron Paul

The reason why nothing changes to reverse the foreign policy of the imperial empire is that international globalists control the country. The horrors of two world wars, the cold war, Korea and Viet Nam destroyed the essential wisdom practiced at the inception of the nation. The incessant intrusion into the Middle East brings us to the brink of WW III. Now the next frontier is being prepared to include Asia, Africa and the Arctic. As long as the public accepts a foreign policy of an arrogant super power, the path to oblivion for the Republic is ensured.

Essentially, both Democrat and Republican party elites are conjoined at the hip when it comes to protecting the military-industrial-security complex. The global interventionist foreign policy, that only protects the corporatists and banksters, endangers the unwashed citizens that are constantly used as cannon fodder. People should not be surprised, when blowback comes home to roost, as the result from such caustic imperial hegemony.

The departure from our heritage is clear, when viewed from the historic wisdom of our inception as a country. The Case for an America First Foreign Policy by Ralph Raico, sums up well just how far down the rabbit hole the government descended.

“For most of our history, America First was the foreign policy of the United States. The record is laid out by the great historian Charles A. Beard in A Foreign Policy for America, published in 1940. In our dealings overseas, we followed the guidelines laid down by George Washington in his Farewell Address to the American people:

The great rule of conduct for us in regard to foreign nations is — in extending our commercial relations — to have with them as little political connection as possible.

George Washington’s outlook thus involved three main principles. First, we would engage in mutually beneficial, peaceful commerce with the rest of the world, but “forcing nothing,” as Washington made a point of adding. Second, while trading with them, we would avoid entanglements in their political affairs and their quarrels with other nations. Finally, we would always remain strong enough to defend ourselves from attack.”

With the exile of Ron Paul from party politics, who represents an alternative foreign policy to the jingoism of the establishment elites? Consider the positions of Libertarian candidate Gary Johnson and the Constitution Party candidate Virgil Goode.

For background on Gary Johnson on his stand of the issues and a YouTube video,Gary Johnson Peace is cheaper. Gary Johnson on Foreign Policy, offers a short summary of his proposals.We can no longer afford to shell out billions in foreign aid

When I visited Occupy Wall Street, I felt the frustration of young people who wanted to work but couldn’t get an interview, much less a job. When I visit business owners and employers, I meet people who want to hire, but can’t.

Meanwhile, the federal government is spending us deeper and deeper into debt while we shell out billions in foreign aid we can no longer afford and trillions more for foreign wars in which our national interest is just not apparent to me.

No foreign aid spending unless it protects U.S. interests

Maintaining a strong national defense is the most basic of the federal government’s responsibilities. However, building schools, roads, and hospitals in other countries are not among those basic obligations. Yet that is exactly what we have been doing for much of the past 10 years. Given trillion-dollar deficits, America simply cannot afford to be engaged in foreign policy programs that are not clearly protecting U.S. interests. There is nation-building and rebuilding to be done right here at home.

Act in US self-interest, but wary of unintended consequences

A: I think we should act in our self-interest. As I understand it, I think Eisenhower was a pretty good role model for that. Morally, you can justify almost anything we do by saying that we’re doing it for the sake of others. I would point to past realities that have unintended consequences. For example, by taking out [the secular regime in] Iraq, we removed a threat to [the religious totalitarian regime] Iran.

Maintaining a strong national defense is the most basic of the federal government’s responsibilities. However, building schools, roads, and hospitals in other countries are not among those basic obligations. Yet that is exactly what we have been doing for much of the past 10 years.

Given trillion-dollar deficits, America simply cannot afford to be engaged in foreign policy programs that are not clearly protecting U.S. interests. There is nation-building and rebuilding to be done right here at home.

Our military should remain the most potent force for good on Earth. To do this, we should resort to military action as the last option and only as provided in the Constitution.

AMERICAN MILITARY ACTIVITIES IN AFGHANISTAN SHOULD END, our troops returned home, and the focus of our foreign policy reoriented toward the protection of U.S. citizens and interests.

With Osama bin Laden now killed and after 10 years of fighting, U.S. forces should leave Afghanistan’s challenges to the Afghan people.

Decades after the collapse of the Soviet Union, American troops remain scattered throughout Europe. It is time to reevaluate these deployments.

The U.S. must make better use of strategic alliances which allow greater sharing of the human and financial burdens at less cost of protecting national interests.

No criminal or terrorist suspect captured by the U.S. should be subject to physical or psychological torture.

Individuals incarcerated unjustly by the U.S. should have the ability to seek compensation through the courts.

Individuals detained by the U.S., whether it be at Guantanamo Bay or elsewhere, must be given due process via the courts or military tribunals, and must not be held indefinitely without regard to those fundamental processes.

For background on Virgil Goode and details on his stand of the issues and a YouTube view, Constitution Party Candidate Virgil Goode, presents an alternative to the establishment party line.Virgil Goode on International Relations: I oppose the placement of our Armed Forces under United Nations command. We need to curtail expenditures to the UN, the World Bank, the IMF, and to foreign nations. Our sovereignty, in my opinion, should always be paramount. I also vigorously oppose Agenda 21 and other globalism schemes so harmful to the citizens of the United States.

Voted NO on reforming the UN by restricting US funding.

Voted YES on withholding $244M in UN Back Payments until US seat restored.

Voted NO on $156M to IMF for 3rd-world debt reduction.

Voted NO on Permanent Normal Trade Relations with China.

Voted NO on $15.2 billion for foreign operations.

Foreign aid is often more harmful than helpful and should be curtailed.

US military personnel should always be under US command.

Foreign policy directly affects the ability to defend ourselves from attack. Even so, the sacred internationalist cannon that a global garrison presence is required to defend our own soil is harebrained. Fighting foreign wars, police actions or pre-emptive strikes are wholly outside our own self-interests, for “so called” victory, never enhances our own existential security.

Few will vote for Johnson or Goode for a myriad of reasons. Excluding the destructive mainstream brainwashing tenet that only a candidate from the two clone parties deserves your approval, one needs to ask why the American public continually accepts an interventionist foreign policy and turns their back on the wisdom of our first President, George Washington?

What is in the militarist machismo mindset that claims that every overseas adventure is a just war or any foreign intrusion is justified by making the world safe for democracy?

Ron Paul articulated the viable criteria for “forcing nothing“.

Johnson favors making better use of strategic alliances, which is more conventional than Goode’s position, which sees no sharing of command within alliances of US military personnel. Both candidates recognize that foreign aid and/or nation building are dubious violations of Washington’s great rule of conduct – as little political connection as possible.

On October 23, 2012, a Free and Equal Debate will engage third party candidates. While none will be sworn in as the next President, several may well have better ideas than the country will be compelled to experience under from the next version of an approved and selected establishment administration.

The foreign policy of the last hundred years has consistently destroyed the sacrifices and deeds of our founding fathers. The country is a mere shell of the nation that once upon a time, championed individual liberties and human dignity. The quickest way to destroy the Republic was the replacement of a Washingtonian foreign policy with the Wilsonian internationalist disease. Reject any candidate that will not commit to an America First tradition.