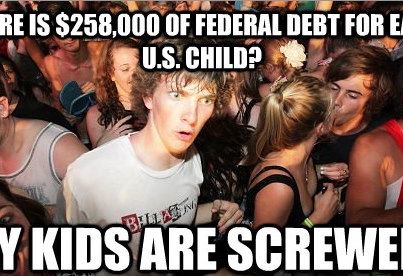 Amazing how this was barely discussed over the course of this campaign – and we didn’t get to this point just under Obama – this has been going on for a long, long time. More than one president has presided over this mess. And if you ask me, this is way more dangerous to us than any other issue.

If Americans under the age of 18 were required as a group to pay off the entirety of the federal government’s debt in equal shares, each would now need to pay about $218,676.

That is more than the $130,468 average price tag for four years at a private college or the $173,100 median price for an existing one-family home in the United States.