Social Conservatives and Libertarian Party Candidates Are Killing the GOP 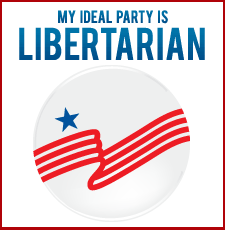 In 2010, the GOP lost 2 senate seats, Colorado and Nevada, that it should have won. The Republicans lost those crucial races because both candidates, Ken Buck and Sharon Angle, were radical pro-lifers who campaigned on ‘human life begins at the precise moment of conception’ and all abortion should be outlawed under any circumstances.

In 2012, the Republicans lost senate seats in Missouri and Indiana because of idiotic rape comments made by social conservatives Todd Akin and Richard Mourdock.

Besides the social conservatives, there is another block of voters who are killing the GOP. The Libertarian Party vote is raking in enough votes to split conservatives and swing an election to a Democrat.

The clueless GOP elites, meanwhile, opine that it’s getting its butt kicked in general elections because conservatives refuse to hold their noses and vote for Romney styled big spending Republicans moderates. The GOP refuses to face the bitter truth that its losing its base because the Republican Party really isn’t any different than the big spending Democrats they claim to oppose. Republicans are very much ‘the borrow and spend’ big government, big spending party.

Let’s examine how the Libertarian Party vote smacked the GOP.

In the Indiana senate race where social conservative Richard Mourdock lost to Democrat Joe Donnelly 49.9% to 44.4%, the Libertarian candidate Andy Horning got 5.8%, here.

In Missouri where the now infamous Todd Akin of the ‘legitimate rape’ fame got walloped by incumbent Claire McCaskill 54.7% to 39.2%, it’s important to note that Akin was running about even with McCaskill before his EPIC blunder.  Given that it was going to be a tight race under the best of circumstances, it instructive to note that the Libertarian candidate Jonathan Dine pulled in a very significant 6.1%, here. It’s entirely possible that McCaskill would have squeaked by anyway if Akin hadn’t blundered and once again the Libertarian vote would have cost the GOP another victory.

The uber liberal Daily Kos literally gloated over how the Libertarian vote delivered 9 victories to the Democrats in tight races that included 2 senate seats, a governorship and 6 house seats.  The Daily Kos was reporting only on its early preliminary calculations and indicated that the Libertarian vote may have been even more decisive.

Libertarians provided the margin for Democrats in at least nine elections

However, I have no problem whatsoever with the Libertarian Party smacking the GOP hard when it runs horrid liberty slashing crazies which, quite frankly, is mostly the norm in the GOP.

Meanwhile, the war for the soul of the GOP continues and liberty activists will continue to indeed wage an epic battle to takeover the GOP from the warmongering, big spending, deficit loving and socially intolerant socialist statists in elephant suits.

If the Libertarian Party truly stands for liberty, sometimes the best option is to just get out of the way and allow liberty to prevail.  I can’t think of anything more devastating to liberty than Republican liberty candidates and Libertarian candidates locking horns in mortal combat to deliver perpetual Democrat ballot box victories.