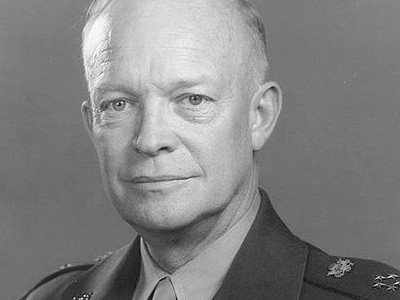 As Congress considers across-the-board defense cuts, let’s call on the wisdom of Dwight Eisenhower, the last general to become president of the US.

In one sense, Eisnhower’s warnings about the rise of the military-industrial complex never came to pass, according to historian Aaron O’Connell, who notes in the New York Times that military spending has declined as a share of GDP; military research has spurred the US economy, not held it back; and the defense industry is not driving foreign policy any more than it used to.

Still, you’ve got to think Eisenhower would be shocked to hear that America spends $700 billion on defense. Here’s how he described the opportunity cost of war in 1953:

“Every gun that is made, every warship launched, every rocket fired signifies, in the final sense, a theft from those who hunger and are not fed, those who are cold and are not clothed. This world in arms is not spending money alone. It is spending the sweat of its laborers, the genius of its scientists, the hopes of its children. The cost of one modern heavy bomber is this: a modern brick school in more than 30 cities. It is two electric power plants, each serving a town of 60,000 population. It is two fine, fully equipped hospitals. It is some fifty miles of concrete pavement. We pay for a single fighter plane with a half million bushels of wheat. We pay for a single destroyer with new homes that could have housed more than 8,000 people. This is, I repeat, the best way of life to be found on the road the world has been taking. This is not a way of life at all, in any true sense. Under the cloud of threatening war, it is humanity hanging from a cross of iron. […] Is there no other way the world may live?”