Socialism Is Inhuman And Unnatural 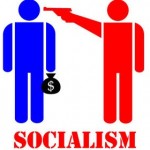 Let’s face it, humans are social, but not socialist. Nature is not socialist. Every moving, living thing on this planet is not born socialist. Socialism is a made up construct, based on a perceived unfairness from another era. It was invented, out of the blue, by people who looked at this “unfairness”, even though it was contrary to nature, and said “Wouldn’t it be great if humans could help each other instead of compete with each other”. This, of course, over time morphed into “well, if you won’t voluntarily help your fellow man, we will force you to”, by stealing your money (via taxation) and using it to “help” those less fortunate. If you look around you in the natural world, and even in the pre-government human world, these things did not exist. Trade, however, as capitalism, pre-dates everything, and is perfectly in line with nature.

Nature IS competition. Evolution is survival of the fittest. We did not evolve to this point in our species by supporting the weak – we got here by letting the weak die off. Competition is part of the soul of nature. Socialism blunts or destroys that competition, basically going against not only our very nature, but all of nature. Now some people say that socialism is a more enlightened state of man, that we have raised ourselves up from base level competitive instincts in order freely help our fellow man. We can do that without an overarching government forcing us to do it. If we are allowed to keep all of what we produce, then we are free to trade and/or give it away. Enlightened man is compassionate, and if, given back the money that was stolen from them, or not taken from them in the first place, would gladly contribute to those less fortunate.