Those Fleeing Obama’s America: Prepare to be taxed 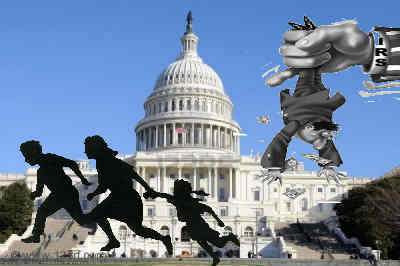 If you haven’t already gotten your money out of dodge, it may be too late. Note that precedent for this tactic was set by Hitler. This is truly government gone wild. It is not safe to be in or flee America. Maybe the secessionists are right.

Senator Charles Schumer has recently proposed a new law to tax Americans heavily for leaving the United States. It was in reaction to the news that Eduardo Saverin, co-founder of Facebook, had renounced his American Citizenship and was taking his $2 billion dollars in capital gains with him.

Schumer proposed to tax him 30%. Sadly John Boehner, Republican, Speaker of the House (I still think he’s a disguised Democrat), said he would support the measure.

Schumer must thank Adolph Hitler for this idea. The Fuehrer instituted the Reichsfluchsteuer  tax of 25% on Jews leaving the Fatherland in the 1930s. So Herr Schumer has merely taken the basic idea and upped it by 5%.

“Schumer’s attack is fundamentally misguided, and reveals a disturbing attitude toward private property. Should it impose such a tax, the American government would be saying that property is no longer truly private.”

via Those Fleeing Obama’s America: Prepare to be taxed.