Why Boehner Needs to GO! He’s a Drunk, Corrupt and Cheats on His Wife. 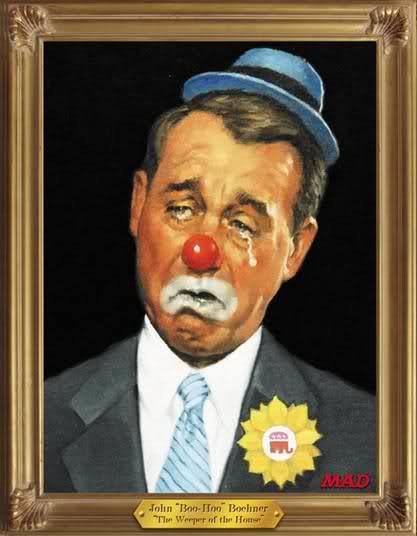 Republican Speaker of the House John Boehner is symbolic of everything that is wrong the the Republican Party. He’s corrupt to the core, lobbyist owned, an advocate for big spending and debt, plus a staunch defender of the militarized police state and endless wars of empire.

That Boehner is atrocious is only mildly relevant and what is significantly more relevant is that Republicans overwhelmingly supported Boehner as Speaker. Boehner was elected Speaker and not selected. That alone speaks volumes about the integrity and character of Republicans in the House of Representatives.

Boehner is suddenly in the news because the House Republican Leadership under Boehner removed several conservative representatives from key committees for refusing to toe the party line on spending and debt which, of course, translates to genuflecting before and licking the boots of Boehner and the GOP/RNC machine. But the arrogant, corrupt and autocratic Boehner is taking his threats to new heights.

Boehner Says Members Will Be Punished for Their Votes

This is no veiled threat.  In fact, it’s explicit, overt and even reeks of Nazi styled authoritarianism.   That such despicable tactics are now routine in the Republican Party is deeply disturbing on many levels.  Meanwhile, the conservative base has been extremely irate with the Republican Party and its leadership for years.  In fact, they were sufficiently irate to NOT vote Republican in the general election.

What do we know about Boehner?  Former Representative Joe Scarborough let loose with his thoughts on Boehner.

According to Joe Scarborough, House minority leader John Boehner is a lazy bar fly, and maybe worse. On Wednesday’s “Morning Joe” Scarborough went off on Boehner, a fellow Republican, leaving many viewers wondering if the Republican congressman suffers from alcoholism.

“After five o’clock, six o’clock at night he’s disengaged — at best,” Scarborough continued. “You can see him around town. He does not have, let’s say, the work hours of Newt Gingrich. … Every Republican I talk to says that John Boehner, by five or six at night, you can see him at bars.”

Scarborough is not the first to notice Boehner’s taste for the sauce. Boehner is well known to Washington insiders for his drinking.

When he was chosen House minority leader in 2006, the San Francisco Chronicle reported, “Boehner is famous for the lavish parties he throws, including an annual ‘Boehner Beach Party’ fundraiser. At the GOP’s 2004 convention in New York, Boehner hosted a party that raged all four nights of the convention at Tunnel, a West Side nightclub.”

In 2007, Politico took a more pointed dig, in an item headlined “Boehner cries again, getting a rep as a ‘weeper,'” which pointed out, “This is getting to be something of a habit for the Ohio Republican. One of his GOP colleagues noted that Boehner cries more often later in the day. Go figure, eh.”

Perhaps it is time Republican colleagues staged an intervention for House minority leader John Boehner. Watch the video. What do you think – is Boehner a lazy drunk – or just another good time Charlie?

Boehner being a lazy, partying drunk is only part of the Boehner story. That Boehner is wired into lobbyists and serves their exclusive interest is well known in the DC District of Crime.

Boehner’s primary residence is in West Chester, Ohio, but for $1,600 a month, he rents a two-bedroom basement apartment near the House office buildings on Capitol Hill owned by Milne, Boehner spokesman Don Seymour said yesterday….

Boehner isn’t just a lazy drunk with close ties to the lobbying industry, it’s been reported that this married Republican Congress Critter even sleeps with lobbyists.

Yes, John Boehner Sleeps With Lobbyists– And Not Just Figuratively

“Everyone” (but the voters) knew Mark Foley (R-FL) was molesting underage boys and “everyone” (but the voters) knew Larry Craig (R-ID) was trolling the Washington, DC public toilets looking for love and “everyone” (but the voters) knew John Boehner was an inveterate skirt-chaser who’s had numerous affairs. His poor wife, Debbie, never leaves the gated community of McMansions he has her stashed away in. But what makes the Boehner sex scandal more compelling is that he’s doing it with a lobbyist– and everyone, even the voters know he’s one politician infamous for his shady relations with lobbyists– and that he had warned Republican caucus members back in July that they weren’t allowed to screw the whores attractive young female “lobbyists” that the big K Street firms hire specifically to get on the good side of legislators– at least not until after the elections.

On 5/1/2008 Republican Congressman John Boehner voted for the Student Loan Provision Changes. HR 5715 was a Democrat introduced Bill that significantly increased government loan guarantees for student debt, yet Boehner and most of the Republicans voted for this anti-free market big Government bill…..

On 2/7/2008 Congressman John Boehner voted with the majority of Congress (380-34) for HR 5140, the Economic Stimulus Plan. No fiscal conservative pro-free market politician would vote for this bill as it not only provides a certain demographic with a welfare check but in addition this bill increased the FHA loan limits. By increasing the FHA loan limits for certain real estate to $633,500 and the GSE loan limit to $729,750 the Federal Government guarantees more debt and therefore puts itself at even greater financial risk of loan defaults. Not only is this fiscally irresponsible but it is also anti-free market as the government guarantees non-sense loans that the private market would not even make without such guarantees in place. This type of market interference greatly contributed to the Real Estate Bubble.

Congressman and Presidential Candidate Ron Paul who warned about the Housing Bubble in 2002 was one of only 34 Congressman voting against the Economic Stimulus Plan.

On 06/28/2002 Congressman John Bohener voted to massively increase government spending with his Yes vote on the Medicare Modernization and Prescription Drug Act which authorized $350 billion in spending for the Medicare program….

Throughout his political career in Washington D.C., John Boehner also voted for hundreds of billions in foreign aid. Being the “limited Government conservative” that he is, Congressman John Boehner also voted for billions of dollars for socialist programs. In 1997 Boehner voted for $54.42 billion in mostly socialist spending, with $25 billion going to the Food Stamp Program, $7.77 billion for Child Nutrition Programs, $3.92 billion for Nutrition programs for women and children. In 2002, with his Yes vote on HR 4743 John Boehner voted for an additional $16.6 billion in socialist spending through Temporary Aid for Needy Families and hundreds of millions of dollars to promote marriages. These are hardly votes that are fiscally conservative and in the interest of limited Government…

Not surprisingly, limited Government Hypocrite Boehner joined the GOP and many Democrats with their bailout for Wall Street with a Yes vote for HR 1424, the Financial Asset Purchase Authority and Tax Law Amendments which authorized $700 billion in bailout spending.

The fraud known as the Republican Party is downright laughable as well as pathetic and immoral.   The GOP has become a grotesque caricature of the remnants of the conservative movement that was hijacked by neocons, theocrats, commies, statists, oligarchs and Nazis.

That a man like John Boehner was elected Speaker of the House attests to the moral bankruptcy of the Republican Party, its leadership and its insidious corruption.

Really!  The Party of Family Values elects as Speaker a man who is a well known drunken partying cad about town, a man with notorious deep ties to the DC lobbyist establishment, a man who cheats on his wife and sleeps around, a man who spends taxpayer dough like a drunken sailor (sorry, didn’t mean to insult sailors) and man whose personal and professional morals are lower than whale dung.

Hollywood and the realm of fiction couldn’t concoct a more bizarre plot.

This GOP and its arrogant elites must be sunk if conservatism stands any chance whatsoever of surviving.