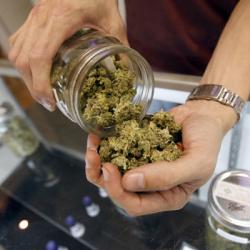 Listen up, GOP! If you are interested in staying relevant – you must become more libertarian. Most people ARE libertarian underneath, they just don’t admit it! Plus, smoking pot is not going to kill this country, but our debt is.

If marijuana advocates have come down at all since last months victories in Colorado and Washington, then a couple of recent national polls should give them another lift. New surveys by CBS News and Quinnipiac show 47 to 51 percent of Americans supporting legalization, with between 44 and 47 percent opposed. This is good news for liberals, but not necessarily for President Obama. After all, both the Washington and Colorado laws expressly contradict the Controlled Substances Act, which President Obama is supposed to enforce. The Department of Justice would probably win lawsuits against both states, but not without angering the young pro-pot voters who helped return Obama to the White House.

Young voters might be pro-Obama, but theyre even more pro-marijuana. While 60 percent of 18-29 year olds supported the presidents reelection, the CBS News and Quinnipiac polls, as well as the Washington and Colorado exit polls, show an impressive 65-70 percent of voters under age 30 supporting marijuana legalization. The rise of the millennial generation—not persuasion of older voters—is primarily responsible for marijuana’s growing strength in national polls, with 65 to 70 percent of seniors remaining opposed to marijuana legalization. With generational change already responsible for the GOPs national struggles, the party could really use a break from cultural questions that pit its elderly base against millennials.

Fortunately for Republicans, they actually have a rare opportunity here to seize the middle ground and appeal to younger voters. While the Republican rank-and-file still oppose outright marijuana legalization, the issue could fit within the partys ostensible state-rights philosophy. GOP voters seem to agree. CBS News found that 65 percent of Republicans support allowing state governments to determine the legality of marijuana, compared to just 29 percent who believed the federal government should decide. Rand Paul has already suggested moderation on marijuana legalization as a helpful step toward coping with generational change.

via Marijuana: A Winning GOP Issue? | The New Republic.