Multiculturalism Is A Failure, But We Are Doing It Anyways… 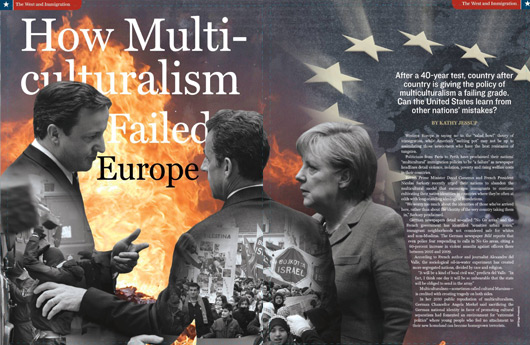 Do you know one of the reasons why America is better than every other country? It’s pretty simple. America has a “melting pot” and most other countries are into “multiculturalism” What are the differences you ask?

In the eighteenth and nineteenth century, the metaphor of a “crucible” or “(s)melting pot” was used to describe the fusion of different nationalities, ethnicities and cultures. It was used together with concepts of America as an ideal republic and a “city upon a hill” or new promised land. It was a metaphor for the idealized process of immigration and colonization by which different nationalities, cultures and “races” (a term that could encompass nationality, ethnicity and race) were to blend into a new, virtuous community, and it was connected to utopian visions of the emergence of an American “new man”. The exact term “melting pot” came into general usage in 1908, after the premiere of the play The Melting Pot by Israel Zangwill.

Multiculturalism is the acceptance of multiple ethnic cultures, for practical reasons and/or for the sake of diversity and applied to the demographic make-up of a specific place, usually at the organizational level, e.g. schools, businesses, neighborhoods, cities or nations. In this context, multiculturalists advocate extending equitable status to distinct ethnic and religious groups without promoting any specific ethnic, religious, and/or cultural community values as central.

What does this mean? Well, it means that when you come to America, you are expected to be American first, and then celebrate your other culture. Your “Americaness” should take priority over whatever else you are. So if you are from Greece originally, sure you can still maintain your Greek culture, but not are the expense of being American. You are American first, adopting the culture, laws and customs of America, and Greek second. The core of American culture thus progresses and is maintained by a strong connection to being American, life liberty, the pursuit of happiness and all that good stuff.

In multicultural societies, like Canada, the UK, most of Europe and many others, immigrants to these countries are allowed to maintain their culture as a higher priority than taking on the culture of the country they have adopted. These countries willingly allow their new immigrants and citizens to subsume their culture under the immigrant’s culture, and in some cases, laws and customs. In the process, instead of the adopted countries culture being strengthened by the immigrant, as they add to the culture as a whole, they take from the culture. They weaken the culture. They, in some cases, actively work to take down and/or modify the culture of their adopted country. They try to get the best of both worlds, the services and opportunity of the new country, and the old rivalries and hatreds of the old country.

Progressives love the multicultural vision, thinking that it makes them so tolerant. But it comes at a huge cost to the culture of the adopted country. America has toyed with it, but make no mistake, if we adopt it, it will be the end of America. Now please understand, I’m not saying to completely divest yourself of your home countries culture when you emigrate to America. You can still of course honor the culture of your country in a million different ways, but since you came to this country most likely in order to avoid persecution and/or for the great economic opportunity America affords, you should honor America and its culture as well, don’t you think?

We are already seeing some steps in that direction. When was the last time you saw a flyer from any branch of the government that only came in English?

But wait you say, Future, you are just being racist. Au contraire, I say. Asking someone to adapt to our culture is very different from accommodating every other culture above our own. We HAVE a very strong culture of our own, and most immigrants (at least the legal ones) are here so that they can benefit from the opportunities America affords them, not the services the American government provides via theft.

America is special for a reason. People come here looking for a better life, so why encourage them to have the same life in a different place?

Honor what we have built here, it’s good. People emigrate to America more than any other country for a reason. Let’s keep that reason solid.