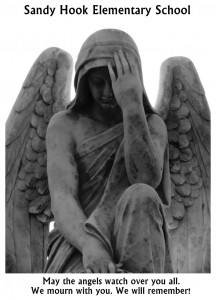 First of all, allow me to send my thoughts and prayers to those who lost loved ones this day in what can only be described as an act of an evil person. No words I can say will assuage your anguish nor will they bring your loved back.

Believe me if I had the power, it would be done instantly.

This is a time for all of us to hug our children a little longer and a little tighter. It is a time to take a moment to sit and play with toys, or help with homework. It is a time to grateful to God that they are home safe with us.

I ask all of you to say a prayer for all those who were killed today by the act of anevil, deranged mind.

I for one do not care at all who this demented psycho was. I do not care what his reasons were. I do not care that he was picked last in kickball, or the coach didn’t let him play. He wasn’t hugged enough as a child, or Mom and Dad worked long hours and he felt neglected. None of that matters to me.

I also do not care what type of firearm he used, or how many rounds of ammo he had. I do not care what he was wearing. Like any of that makes a difference, to the mom or dad or both who just got that message almost every parent fears.
My question is this. Why if I have to go to court do I need to go through 3 checkpoints before they let me anywhere near a courtroom of clerk’s office, but I can enter my kid’s school a variety of ways? Are Judges really more important than our children?

The courthouse near me has maybe a hundred armed officers at any given time of the day. But the school has 1. One! Singular! One less than 2! And often that officer might have 2 or 3 or more schools they have to handle. Again is the judge more important. Judges can hide a 12 gauge under those robes and an arsenal behind their desks. I think they can take care of themselves.

Now in the next days and weeks we will hear the Costas’s of the world screaming about gun control. In China,

Now by my math that makes 52 dead in these incidents. Now keep in mind this is China. Where gun control laws are serious. And prisons are not the hotels we use here. And still we see kids being killed by evil, warped, demented and sick people. No guns were used. The weapons were; knives, axes, box cutters and a meat cleaver. Not one shot fired.

But here in U.S.A. there will be an outcry against the ownership of guns. As if that would have stopped this madman. As if criminals obeyed laws.

Tonight! Hug those kids a little longer. Read them a story at bedtime. Play a board game.

You never know. Tomorrow they could be gone, or you could. Tomorrow is nothing more than a promise yet fulfilled. There are no guarantees. These parents certainly didn’t think when they sent their children off to school this morning, that this is how their day would end.

Again my thoughts and prayers to ALL of those who lose a loved one today. Maybe if we all took a moment to think of the victims, this would not happen as much as it seems to these days.