Don’t Despair: Remember Only 25% Of America Voted For Obama 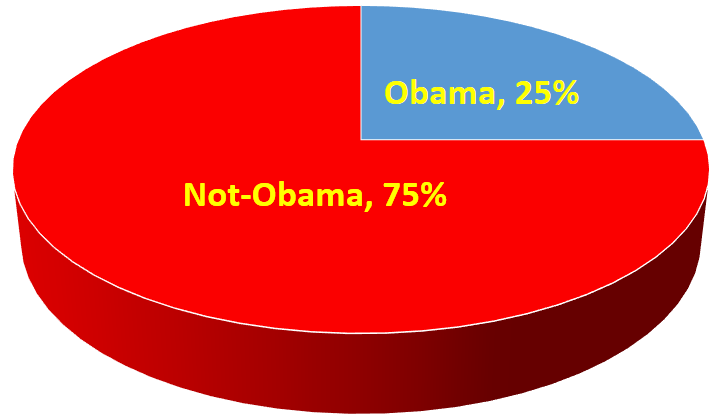 After the last election I was pretty despondent. Of course, once I realized that it wouldn’t have been that much of a difference had Mitt won, I started thinking about the state of America and why what happened happened. I started playing with numbers – remember the 47%? Let’s say that its true that about 50% of the country gets benefits from the federal government in one way shape or form.

So basically you have 25% of the country telling the other 75% of the country what to do. So the next time you think that the socialists have taken over and America is lost, just think about those numbers. A full 75% of eligible voters in this country do not feel that Obama is taking this country in the right direction. A full 50% of eligible Americans over the age of 18 basically said no to EITHER candidate. The next time you hear Obama or his minions or the mainstream media say the word “mandate” understand that there is no such thing as a mandate when it only comes from a mere 25% of the country.

Of course, those 25% have all of the power that comes from an overreaching, warmongering state, which has no qualms crushing its citizens. But I think what we need to take heart in is that there are still the 75% of us who do not agree with Obama and his policies. We just need the right candidate, one who can, next time around, appeal to that huge swath of Americans, who have, I believe, simply given up on politics, period. They don’t like any of the choices that they have, so they decided to stay home.

America is not lost at all. When 75% of the country disagree with this administration, you know that dissent is alive and well.