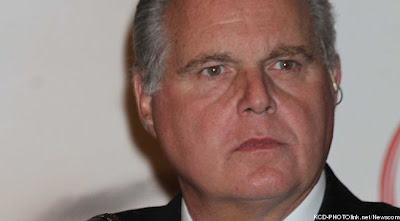 The other day, just for fun, I flipped on the radio to listen to the last 10 minutes of the Rush Limbaugh program. The guy is just a shadow of his former self. He sounded so depressed, so down, so pessimistic about the future, but I’m wondering if his listeners are just disappearing in droves. He had a caller on who was trying to be optimistic about things. He was trying to say how we could “Take Back America”. What the GOP needs to do in order to take back America. And the whole time Rush kept knocking him down. He kept saying things like well that’s not what TMZ would be talking about and it’s got nothing to do with celebrity of the Kardashians so no one’s going to care about it nothing’s been a change.

He was really really down. And I can see that. I can see why he would be really really down. His Republicans have sold us out. And for some reason he can’t wrap his mind around the fact that both parties are just as corrupt. He had so much faith in Mitt Romney, in fact all of these conservative commentators had so much faith that Mitt Romney was going to take this election that they’re still in mourning.

All of these conservative commentators have to understand that the two-party system that we have today does not represent, in any way shape or form, the desires of most Americans. As I outlined in a previous post about numbers, a full half of this country did not vote for either party in the last election. If you count up the number of eligible voters 50% of them did not vote at all. Neither political party matches what Americans want and this is too much for elRushbo to handle.

What do Americans want? Social Freedom, Fiscal Responsibility & Limited Government. Until one party or the other embraces that, 50% of America will stay away from the polls. And I’m guessing that that number will just keep getting bigger and bigger.