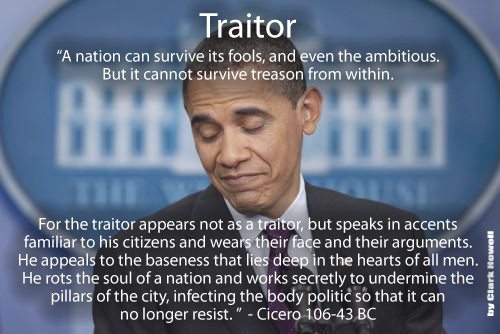 19, count ’em, 19 new executive orders which will effectively gut the 2nd amendment in this country. This is no longer a constitutional republic, this is a pure dictatorship, through and through. There is no stopping this man now – he has shown that he is ready, willing and able to suspend the checks and balances that keep the government in check. This is no longer the America of the founders.

Remember when Obama told a meeting of Hispanics way back when that he could not unilaterally move on immigration because of congress. He actually said in that meeting “I am not king, there’s Congress”. Well, it appears that he no longer believes that he is not king.

Can you imagine any other president throwing a ton of resources trying to figure out how he could legally gut the constitution? Can you imagine ANY other president in history going to these lengths in order to disarm the citizens of this country? Well, I guess Bush did, with the Patriot Act, but Obama takes it to a whole new level.

20 children died at the hands of a madman. This gives this madman an excuse to enslave the entire country. We are all slaves now.

My first instinct: how can we fight this? Is impeachment just an idle threat, or can it really make a difference? Made no difference to Clinton, though his crimes were much less severe. And those crimes weren’t as treasonous as these.

Do you remember that there was one season on 24 when the enemy turned out to be the President of the United States? That the corruption started at the top and worked its way down – that there were a lot of good people caught in the crossfire, but that the core itself was rotten? The Traitor-In-Chief has made himself known.