Clinton On Benghazi: Some Crises CAN Be Allowed To Go To Waste 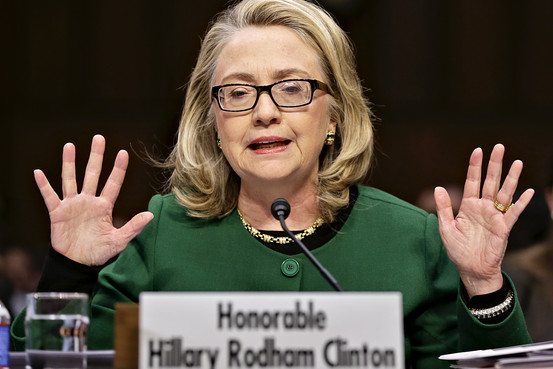 Of course. I’ll bet that’s the foremost question on her mind. Why bother answering questions or getting to the truth about four dead Americans and a scandal which could have resulted in thwarting the re-election of the most unconstitutional president of all time?

What Difference Does It Make?

Now that Obama has been re-installed  there really is no need to obfuscate, is there, Mrs. Clinton? Why not tell the truth, the whole truth and nothing but the truth? Now that you have secured 4 more years of Democrat rule, what difference does telling the truth make. Oh, but of course. You still have some designs on the presidency. You, like most of us, think that “Jokin'” Joe Biden is a complete ass and could never truly become president. You still think that you were cheated by the anointment of this usurper to the crown of the presidency. It should have been you. You must say that to yourself daily!

Yet here you are, making excuses for yet another guy and his transgressions. Taking the fall again. Maybe it was your fault. Maybe it was Obama’s fault. Maybe it was the pipe dream that that whole business of “terrorism”  was over, and that, truly, a place like Libya was now very welcoming to American interests.

But like you say, what difference does it make? To you, maybe none. To Obama, also none. His goal is met. To the rest of the administration, none. Maybe even to most of Congress. None. Some little niggling detail best swept under the rug, eh?

Will we ever really know what happened? Doubtful. No one in the media is interested in the truth, since the truth will likely smear their friends. Remember that the media has a vested interest in seeing Democrat rule extend even beyond Obama’s second term, just in case he and his Congress aren’t able to complete the complete destruction of America in the mere next 4 years due to the actions of a very few brave souls who still believe in the Constitution.

So we will likely never know what really happened. And it will likely pass into history quietly. As you can see, you can let some crises go to waste. Other’s, like Sandy Hook, not so much.

Hillary Clinton is ending her tenure as secretary of state in fiery fashion. “You really get the sense that [Mrs.] Clinton barely managed to restrain herself from dropping an F-bomb there,” remarks New York magazines Dan Amira. He refers to an exchange between the secretary and Sen. Ron Johnson of Wisconsin at a Foreign Relations Committee hearing this morning.

Johnson pressed her about the administrations conflicting explanations for the Sept. 11 attack on the U.S. Consulate in Benghazi, Libya, which killed the ambassador and three other Americans. “With all due respect, the fact is we had four dead Americans,” said the secretary snappishly to the senator. “Was it because of a protest or was it because of guys out for a walk one night decided to go kill some Americans? What difference at this point does it make? It is our job to figure out what happened and do everything we can to prevent it from ever happening again, Senator.”So its “our job to figure out what happened” but it doesn’t make a difference what happened? Huh? What would we do without rhetorical questions?

via What Difference Does It Make? – WSJ.com.