A Real Solution For Illegal Immigration 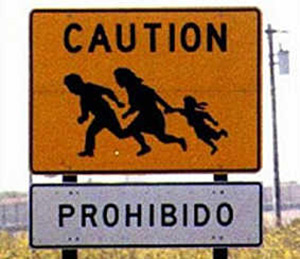 I am a legal immigrant to United States of America. I legally emigrated to United States of America back in 1998 via my employer. At that time I needed an employer to sponsor my residence in the United States. I went through a number of employers, and found one that not only offered me the job I wanted, but also offered to sponsor me via a C and these are. After I came to work for this employer in the United States, they subsequently applied for an H1B visa for me. This took a long time and a lot of money. At any point in the process was possible that I was going to be denied and would have to go back to my native country.

I have spent thousands of hours, thousands of dollars, have dotted every i, have crossed every t, and have totally, scrupulously, followed the letter of the law in coming to this country. I have jumped through every hoop, I have paid every fee, I have waited for every form, I have filled out every form, I have done everything that this government wants me to do in order to come to this country legally.

Now we have an administration and the Congress than wants to take all of those people who did not go through the process that I went through, and just hand them citizenship to this country on a silver platter. Not just the series of visas that I went through, I went through a TN visa, and H1B visa, a green card, and then finally citizenship. As I said it took a long time, a lot of money, and a lot of heartbreak to follow the letter of the law.

But what do I get? I get this administration and Congress basically handing citizenship out on a silver platter, to people who have literally broken the law for years. This is why have a problem with the term “illegal immigrant”. The term should actually be “criminal alien”. These people who are in this country are actually breaking the law simply by being in this country.

Now as a libertarian I’m all for immigration, legal immigration. As I said I’m a legal immigrant myself. I am all for all of these individuals going through some process order to come into this country. This is why I have espoused a very simple solution to this whole thing: it’s a two-point plan.

That’s it. It’s a very simple solution, and everyone benefits. There are literally hundreds of thousands of LEGAL immigrants who go through this painful process, follow the letter of the law because they respect the law, only to see these law breakers jump the queue in front of them. It’s just maddening.

Let me be clear though, as our lord and savior says, I think unlike some libertarians who feel that we might want open borders, at least some minimal process is called for, in order to keep the real lawbreakers from coming in and wreaking havoc. In this day and age, we should have the technology available to us to bestow instant citizenship on anyone, assuming that we can identify them correctly.