Tax The Rich? No, Tax EVERYONE! 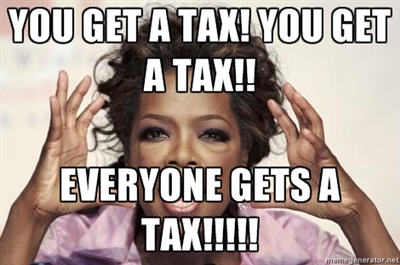 I find it quite amazing that the New York Times can write a complete article about how people are so hard hit by all of these new taxes and completely omit the absolute fact that their savior and lord Barack Obama is directly behind this tax increase. While the man continues to peddle the lie that taxes will only go up on those who make over $250,000 a year, taxes have gone up, and are going up even further, on every taxpayer, across the board. No one is safe from the gaping maw of the state.

So what do we have here? Is it just shoddy journalism, or is it a absolutely disgusting desire to misdirect and misinform the American people about the truth simply because these peoples agenda and their presidents just happen to line up?

Think of it this way, all of you out there who voted for Obama thinking that your lives were going to be better, think again. Neither party is interested in anything but extracting as much money from possible from our wallets – yes even you who aren’t rich. There is no escape from the state, unless you decide to leave the country. Or quit your job and join the welfare roles. Maybe that is their plan all along, after all wouldn’t you love to be on the receiving end of a check from the state as opposed to the other way around, especially when you have very little to give?

Jack Andrews and his wife no longer enjoy what they call date night, their once-a-month outing to the movies and a steak dinner at Logan’s Roadhouse in Augusta, Ga. In Harlem, Eddie Phillips’s life insurance payment will have to wait a few more weeks. And Jessica Price is buying cheaper food near her home in Orlando, Fla., even though she worries it may not be as healthy.Enlarge This Image David Manning for The New York TimesJessica Price, 20, holds two jobs near her home in Orlando, Fla. She is buying cheaper food, though she worries it is less healthy.Readers’ CommentsHas the increase in payroll taxes affected your family and spending choices?Post a Comment »Read All Comments 686 »Like millions of other Americans, they are feeling the bite from the sharp increase in payroll taxes that took effect at the beginning of January. There are growing signs that the broader economy is suffering, too.

via Restored Payroll Tax Pinches Those With the Smallest Checks – NYTimes.com.