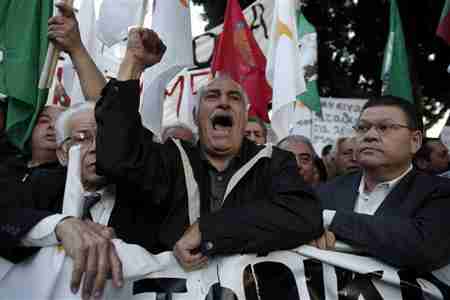 Let’s be honest folks: this was a trial balloon, a test to see what would happen if the state were to seize assets unilaterally. Sure, they pulled back on this one, mostly because it was so obvious and heinous. But states who are salivating over our savings needn’t worry, I’m sure that they will find other ways in which to get to our hard earned money. You can bet that they, or others, will try this again.

It’s not out of the imagination for any state to declare a “state of emergency” and seize all of our assets in banks everywhere. So what you are seeing, my friends, is the future.

Cyprus’s parliament overwhelmingly rejected a proposed levy on savings in banks as a condition for a European bailout on Tuesday, throwing international efforts to rescue the latest casualty of the euro zone debt crisis into disarray.

The vote in the tiny legislature was a stunning setback for the 17-nation bloc; lawmakers in Greece, Portugal, Ireland, Spain and Italy have all accepted unpopular austerity measures over the last three years to secure European aid.

With hundreds of demonstrators facing riot police outside parliament and chanting “They’re drinking our blood”, the ruling party abstained and 36 other lawmakers voted unanimously to reject the bill, bringing the Mediterranean island, one of the smallest European states, to the brink of financial meltdown.