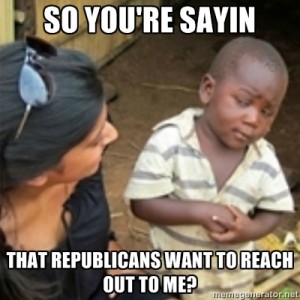 According to a new report by the Republican National Committee, the Republican Party is finally having to come to terms with the problem that “perception of the Party is at record lows.” Voters – especially younger ones – have been “increasingly rolling their eyes at what the Party represents.” Now, the GOP and RNC are struggling to figure out how to put themselves back into a favorable light. What are some of their great solutions? One of the big ones is undercutting grassroots activism even further once the 2016 election rolls around, “discouraging conventions and caucuses” as a method of national delegate selection.

Oh, sure, there’s also the ear-perking idea of “reducing the size of government” mentioned in passing on page 4, but there’s a qualifier added that it ought to be done “while making people’s lives better.” Not surprisingly, these Republican Party operatives still see the role of government as one in which “the government works for those truly in need, helping them so they can quickly get back on their feet.” The writers aptly quote Ada Fisher, a Republican Committeewoman from North Carolina, who comes right out and says that “There are some people who need the government.”

Well, there you go. Keep an unconstitutional system like the welfare state in place, but just make sure it’s only there to help people “make it” when they can’t do so without government. Don’t worry about enumerated powers; this is about the needs of helpless people. The safety net of bureaucracy is a sure shelter from the trials of this world.

Where does that take us? Ultimately, since it’s apparently so hard to get through certain things without government help, there’s nothing to say that there isn’t some point where everyone needs the government for what they can’t handle on their own. When we start thinking this way, it’s always a good time to start reminding ourselves who created many of those hurdles – monetary inflation, a shrinking middle class, and so on – in the first place.

The National Constitution Center staff writers make a lot of fuss over the near total absence of the “tea party” being mentioned in this report. That’s an important point. I think what’s even more telling, though, is the complete absence of any references to the Constitution, let alone even the Bill of Rights beyond just the 1st and 2nd amendments. The writers of the report only speak vaguely of “constitutional concerns” as they might pertain to various state campaign finance systems. Nothing more is said. It’s largely a manifesto about how to make the party more appealing to the unconvinced. It’s more about numbers and a lot less about principles. Personally, I think talking to voters about adhering to the Rule of Law for once is rather appealing, but who am I? I’m just “grassroots,” I suppose.

Gender and race quotas are always a great bonus, too. “The media affairs team at the RNC,” page 20 reads, “should be focused on booking more women on TV on behalf of the party and be given metrics to ensure that we aren’t just using the same old talking heads.” There’s also some peppering all throughout the report that shows a preoccupation with groups of people rather than individuals. It’s imperative, apparently, that the RNC also put together “a nationwide database of Hispanic leaders.”

What does all this say about the GOP insiders’ actual concerns? Are they interested in the promotion of individual liberty, or are they instead consumed with drawing in token people groups? I think these Republican operatives really do presume that their Party needs to be like some sort of seeker-friendly megachurch that’s trying to grow its membership. What’s their denomination? You might call it the good old Cult of Personality.