More Federal Agents in Your State? Sure, Why Not!

With a General Municipal Election just around the corner in Colorado, it’s obviously helpful for locals there to know who their ballot choices are. Honestly, if there’s an election anywhere at all right now, I know that fellow libertarians will agree: research is key.

In District 3 of Colorado Springs, there’s one particular candidate for City Council named Jim Bensberg. On his own site, Bensberg describes himself as a “fiscal conservative” who opposes both sales and property tax increases. I generally expect that kind of thing from the majority of people running for political office in a city like Colorado Springs. They tend to talk a lot about priorities and pragmatic solutions. It’s fairly predictable. Here’s a good example from an Americans for Prosperity survey that was answered by Bensberg, asking him what he’s “most concerned about”:

“I am concerned with traffic flow in and around the City and the increased costs to citizens and businesses resulting from poor traffic management.”

It’s a fairly generic statement. He brings up an apparent problem, but doesn’t offer any suggestions on how to improve it. Nothing profound to see here.

So where do these next few sentences in his answer come from? I think they should completely throw any discerning reader for a loop:

“I would like to see Colorado Springs pursue a federal courthouse since we are the largest city in America without one. As part of a new courthouse complex, I would like to see a campus made up of all the federal agencies including FBI, DEA, ATF, Secret Service, GSA, etc. It would be a financial boon to the City to locate all of our current federal agencies in one location.”

What’s funny to me is how nonchalantly Bensberg tosses this in. Think about the implications for a minute. He wants to have another division of the Bureau of Alcohol, Tobacco, Firearms and Explosives in a state whose governor just today signed three gun control bills into law. Is there nothing alarming about also housing an extra Drug Enforcement Administration office in a state and city that recently – in total defiance of federal law – legalized personal marijuana usage? I wonder how an even more empowered CIA would respond to that whole anti-NDAA resolution which was passed last year in El Paso County. Do you think they’d pay it any mind? 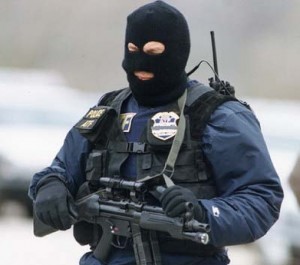 I really do wonder. Would bringing more bureaucratic force to Colorado Springs really be such a “financial boon” for the city’s economy as Bensberg suggests? Well, it would certainly increase the number of opportunities for cracking down on the part of federal agents. Maybe he’s talking about the higher salaries they could receive for doing such a great job.