Life Is Hard. Deal With It. 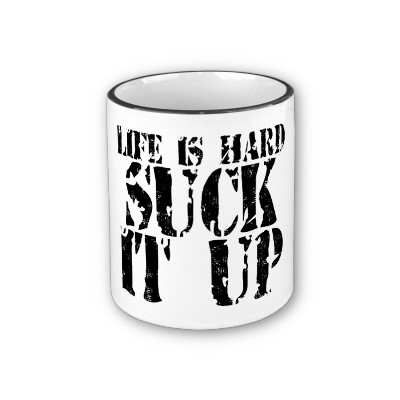 I was driving over to see a friend in the hospital a while back who had had a stroke and was recovering. Super healthy guy – he did work long hours but ate all his veggies, exercised regularly, surfed often, did all the right things, but there he was, in the hospital with a blood clot in his brain. Just 55. He is recovering well now, they just sent him home today.

As I was driving over there, I saw a guy begging by the side of the road. Now we rarely get beggars in this neck of the woods, but there was this scruffy looking guy with a sign which said something about needing to pay for his next meal. The two cars in front of me gave the guy something. I didn’t.

First of all: he guy had a very expensive dog with him. I figured if he really was THAT desperate, companion or not, he could sell the dog and make some money that way.

Life is hard. Life sucks. Life is biting, scratching, clawing your way out of the primordial ooze, fighting every inch of the way, until you are a fully formed human being who can control every lesser animal, vegetable and mineral on this plant and beyond. That is life, human life.

I am the head of my household. I have to provide for my wife, children, step-son and ex-wife. I do this, not because I have to, I do this because it is my responsibility to do it. I choose do to this, because it is the right thing to do. I do not run from it. I do not complain about it. I simply do it, because it must be done.

When I lost my job in 2003, my job became finding another job. I didn’t complain, I didn’t beg. I just went and got another job. The first job I got paid one half of what I was getting paid. The next job after that, three quarters of the first, the next about the same. Took me 2 years to get back to that same level of income.

I didn’t take a 2nd, 3rd or 4th job, but if I had to, I would have. This is my responsibility, to provide for my family.

No one will ever call  me a hero, or sing my praises. In fact, just telling you that I won’t give to beggars will likely earn me someone’s wrath out there. I don’t care what you think. You can say what you want about me, I also do not care.

In fact, this administration has painted a target on my back. Since I work hard, meet all of my responsibilities and commitments, and support myself and my family, I am just the opposite of a hero, reviled, despised, and one to steal more money from.

When I saw that beggar, I wanted to open my window and tell the guy to “get a job” or something, but I thought, what’s the point?

We need to relearn those lessons. We need to get government out of peoples lives – we need to remove that safety net. We need to be exposed to the elements again. Once that happens, we will feel alive again. Yes, it will be hard, but like I said: Life IS hard.

In the immortal words of Captain James T. Kirk:

Maybe we weren’t meant for paradise. Maybe we were meant to fight our way through. Struggle, claw our way up, scratch for every inch of the way. Maybe we can’t stroll to the music of the lute. We must march to the sound of drums.