A Minarchist Take on the Proper Role of Government 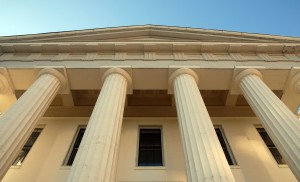 Since my fellow columnist Desmond Jones, Jr. recently discussed the more anarcho-capitalist strain of libertarian thought, I thought it might be worth describing the other side of libertarianism, which is minarchism (or minimal statism). Both minarchism are anarcho-capitalism are completely legitimate forms of the liberty philosophy: we’re free to choose! You might even encounter a third or fourth or twelfth option in thinking about this issue.

Drawing from a more Lockean point of view, the minarchist does still see a place for government, but one in which its role is confined to the protection of private property and enforcement of voluntary contracts. A truly free-market economy, and not a centrally-controlled Leviathan, is the only way to achieve this. Every action of government that goes beyond the confines of that limited role, in the words of Murray Rothbard, “aggravates rather than settles the problems it has set out to solve.”

A proper government would enforce bankruptcy laws, rather than bailing out failing companies whenever they face difficulties. Proper governments would enforce rights of property and uphold our rights to liberty, rather than stripping its citizens of those rights through policies of coercive force and theft. Finally, a proper system of government would ensure that its people have a sound system of money; again, this means getting out of the business of printing money at whim, allowing instead a system of just weights and measures to set in. The government cannot manipulate prices without consequences. It also cannot continue to create false “prosperity” at the expense of real prosperity and ingenuity, while still expecting that false prosperity to continue without a number of fatal heart attacks.

In the U.S., at least, we obviously have the Constitution. There’s a reason that it, too, drew heavily from John Locke’s emphasis on the protection of “lives, liberties, and estates of the people.” Simply compelling our own government to follow that Rule of Law – and having them actually do so – would keep it within all of the aforementioned confines.

What perspective do you fall into? Are your views more in line with the minarchist or the anarchist, or something else entirely? Should government play a limited role, or none? Share your thoughts.