Tyranny Over the Mind 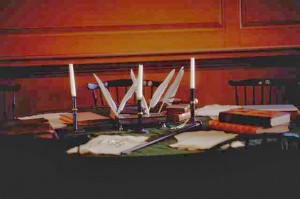 The U.S. Justice Department under Attorney General Eric Holder recently said that homeschooling is not a fundamental right. The Obama administration made that argument in federal court regarding the Romeike family, Christians who sought asylum here in the land of the free after being severely persecuted in Germany.

This is wrong on at least two levels.

First, let’s start with examining why the family was persecuted in Germany. According to the Supreme Court there, the nation bans homeschooling “to counteract the development of religious and philosophically motivated parallel societies.” Without dipping my toe into hyperbole, it’s safe to state factually that Hitler used the public school system to reach the German youth; apparently, the German government still chooses to indoctrinate each new generation with its socialist philosophies. They will not tolerate dissenters. The Romeikes incurred over $10,000 in fines and faced losing custody of their children before asking the U.S. for asylum.

According to the Virginia Homeschool Legal Defense Association, part of our government’s argument was, “… the Romeikes’ case failed to show that there was any discrimination based on religion because, among other reasons, the Romeikes did not prove that all homeschoolers were religious, and that not all Christians believed they had to homeschool.”

Part of that statement is true. Not all Christians homeschool, nor are all homeschoolers Christians. I personally have a homeschooling friend who is not a Christian; however, one of the main reasons she chose to keep her children out of the public school system was so that they would not be indoctrinated by the U.S. government to become compliant little “citizens;” pawns of the state.

That said, the Romeikes did choose to homeschool because of their religious beliefs. For that reason, they should be protected under our Constitution. Duh.

But, let’s go back to the indoctrination issue. Holder said that homeschooling is not a fundamental right? I also chose to homeschool; it was mostly because of my Christian beliefs, yes, but also because I didn’t want my children indoctrinated into becoming good little “citizens” either. And, yet, the state almost got to one of them anyway. When my oldest child entered Sam Houston University, a public school, we were hit with indoctrination during orientation weekend.

At that orientation, all the students were given a book titled, Affluenza: The All-Consuming Epidemic, which was basically a liberal tirade that teaches that material inequality leads to greater unhappiness among the population. If you can sell that philosophy to the public school kids, when they become voters, you can certainly sell the hell out of tax increases and entitlement programs.

Oh, wait. They are voters now. Hence, the reelection of President Obama, the healthcare mandate, the tax increases, etc., etc. …

I have sworn upon the altar of God, eternal hostility against every form of tyranny over the mind of man. (Thomas Jefferson, 1800, in a letter)