Libertarian vs conservative. Does the difference matter?

I am a libertarian. To me that means I reject, with equal vehemence, nonsense from the left and nonsense from the right. As an anarcho-captialist, I can easily see how some of my more minarchist-leaning libertarian friends would disagree, but for me there are fewer things more frustrating than having my left-leaning statist pals drop this question on me:

“So… you’re a libertarian, right? Isn’t that pretty much the same thing as a conservative?

To grasp my annoyance, imagine the following conversation between two casually acquainted co-workers:

Phil: Say, Bill! Do you have any plans for Ash Wednesday?

Bill: Actually, no I don’t. I’m not very religious.

Phil: Sure. But I bet you’ve got something on tap for Good Friday!

Phil: Oh, but I know you’re going to mass on Easter Sunday, right?

Bill: Let’s put it this way, Phil. You know all those rituals you engage in, all those beliefs you have? Like the rosary beads and fish on Fridays and going to confession every couple of weeks?

Bill: Well, I don’t do any of that stuff. I don’t share any of those beliefs.

Phil thinks for a while, then: 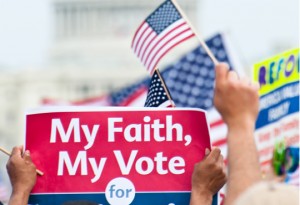 But Phil doesn’t get it. He sees the world in black and white terms. There are those on his team and those on the other team.

My liberal friends don’t get it either. Being a libertarian for me is not pretty much the same as being a conservative. It’s about being on neither team and proudly rejecting the doctrines of both faiths.