Conspiracy theories — let the statists have them!

They’re everywhere. The people who can tell us exactly what really happened in The Boston Marathon bombings, The September eleventh attacks, the Kennedy Assassinations, the Sandy Hook Shootings, last year’s NBA finals. Even before the authorities have an official story, our conspiracy theory minded friends are questioning it.

What’s dismaying to me is how frequently such nonsense comes from fellow libertarians. Especially when one considers that conspiracy theories make more sense for statists.

Why? Conspiracy theories always seem like a good idea to people who need to re-write history to suit their prejudices. The most obvious example is the appeal of ‘international Jewish banker’ tales among those with anti-semitic leanings.

It works that way with politics too. In the statist world people are raised to think of those on the other side of the fence as the cause of everything unpleasant in life. For example, when a leftist thinks of gun violence, the image that springs to mind is of Walmart shopping, truck driving, NRA-supporting rednecks. While conservatives are more likely to brand inner-city, Obama-supporting, welfare-guzzling thugs as the troublemakers.

Witness the re-casting of Bush as the real villain behind the 9-11 attacks by “truthers.” And also take note of the jockeying for political position in the wake of the tragic events at the Boston Marathon. The right is ready to find another aye-rab nation to attack over the incident; while the left is eager to blame domestic terrorism (read “angry white males.”) This kind of lunacy makes sense among those more concerned with scoring political points than seeing the world as it truly is. As libertarians we should resist the urge to play these games. 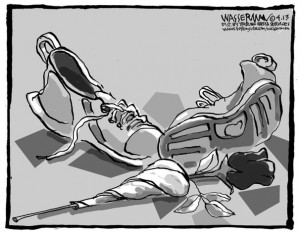 After all, isn’t reality crazy enough?