Older Brother In Boston Bombing Was Arrested Then Killed Later

It seems the official story, that accused Boston bomber Tamerlan Tsarnaev was wounded in a gun battle with authorities and then, in the chaos, run-over with a vehicle driven by his younger brother is just propaganda rubbish.

A witness to his arrest and actual news footage proves Tamerlan Tsarnaev was apprehended, hand-cuffed and placed in a police car. He was killed, obviously, at some later time.

This video includes a somewhat rambling narrative by Dan Dicks of Press For Truth TV, informing viewers of his brief interview with the suspects’ aunt. She says she positively ID’s her nephew in the arrest footage and that the two brothers have interacted with the FBI for some 3 to 5 years.

At the 14:45 mark of the video, there is an eye-witness account of Tsarnaev’s arrest.

At the 18:29 mark CNN footage shows that the older Tsarnaev brother was actually apprehended, was indeed naked (presumably ordered by authorities to strip to confirm he had no additional explosives), handcuffed and placed into a police vehicle.

Additionally, Tsarnaev doesn’t appear to be suffering from any injuries at the time of his arrest, yet his death photo (below) clearly shows something violent happened to him.

The death photo of Tamerlan Tsarnaev. 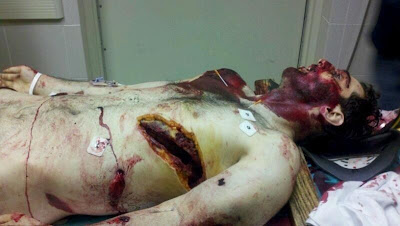 The bottom line here is the details related to the Boston Bombing are more lies put out by your lawless government and spread voraciously by the propaganda press.